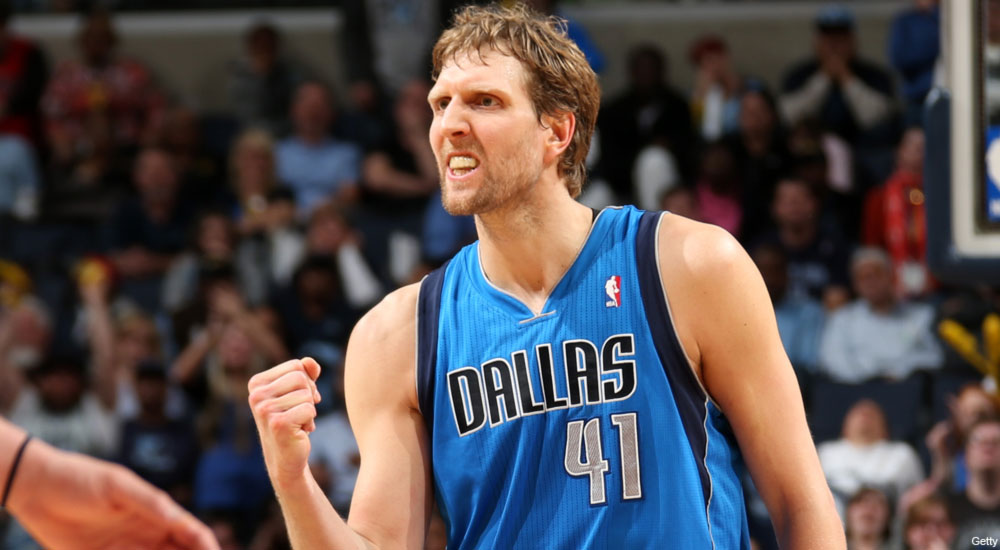 Dirk Nowitzki has been the face of the Dallas Mavericks for more than a decade. His one-legged fadeaway is one of the most iconic shots in NBA history and has been the source of many big-time buckets throughout the years. The burden has been great…but the load might finally become lightened.

The Big German wasn’t himself two seasons ago when he fell below 20 ppg for the first time since his sophomore season. He underwent knee surgery that kept him out for the first third of the season and held him back the rest of the year. Many thought Father Time had finally arrived for the veteran.

That all changed during the Mavs’ post-season run last year as Dirk averaged 21.7 ppg, shot 49.7 percent from the field and 89.9 percent from the free-throw line. He was one of the most efficient players in the League, finishing with a 120 offensive rating—his highest mark since the 2006-07 season when he won the Most Valuable Player award.

Even though Monta Ellis fit seamlessly into Carlisle’s offense (and will most likely find even more comfort during his second season in the system), the ball still ran through Dirk’s hands. His ability to stretch the floor, play with his back to the basket and draw fouls due to his effective pump fakes makes Nowitzki a lethal offensive force who doesn’t need elite athleticism to remain elite. There’s a reason only nine players in NBA history have scored more points than the 2011 NBA Finals MVP.

Even though he regained his statistical form last season, the now 36-year-old power forward did look as if he had lost a step at times—especially when playing more than 35 minutes every game of a seven-game series with the Spurs. Dirk only shot 42.9 percent from the field during the series, and in the Game 7 Spurs’ blowout, he only managed to shoot 8-21 (38.1 percent). Many of his misses came up short and hit the front rim as Dirk’s legs only had so much left in them. As great as he still is, Dirk can’t continue to shoulder so much of the weight moving forward.

Thanks to Mark Cuban’s bravery in going after a restricted free agent who was promised a spot on his former team, Dirk doesn’t have to take on more than he can handle and the team doesn’t have to suffer in the process.

Chandler Parsons is ready to make a statement with the Dallas Mavericks. The small forward has flown under many radars since he left Florida as the SEC Player of the Year and the Rockets took him with the 38th pick in the 2011 NBA Draft. Last year, he averaged 16.6 ppg, 5.5 rpg and 4.0 apg—all career highs. Still, Houston didn’t see him as a player fitting into its long-term championship aspirations.

This season, Parsons is ready to take on a large role with the Mavericks, doing a little bit of everything on both ends of the floor. With Parsons on the rise and Ellis already having a year under his belt with the team, Dirk can finally take the step back he has wanted to take since they scaled the NBA mountain in 2011. (And he also has his pal Tyson Chandler back, someone who will help the entire team buy in defensively.)

Don’t be deceived, though, into thinking this means Dirk is content with his playing ability. As seems to be the case every offseason, Nowitzki has worked diligently with longtime trainer Holger Geschwindner to improve his game. If his fadeaway jumper wasn’t difficult enough to guard, he has now established a quicker shot release. So even if Dirk’s legs are slowing down, he is strengthening other parts of his game, demonstrating his desire to always be developing and never become satisfied.

His minutes may go down, his scoring may decrease, but one thing that will remain constant is his ability to make clutch shots late in games. Even though Dirk isn’t known as one of the great isolation players in the League, he can call for the ball and take his defender one-on-one without any help from his teammates. His back-to-the-basket game becomes even more potent late in games as he can beat his opponent in many different ways. (Maybe one day with a sky hook as well?)

As long as he remains healthy, Dirk is bound to have yet another successfully efficient season while leading the Mavs into the Playoffs. He will continue working on his craft, knock down plenty of awkward shots, break into the all-time top-10 scoring list and find a way to stay out of the spotlight in the process.

Dirk is such an anomaly in the world of professional sports. He is humble and unselfish, and that is why fans, the media, teammates, and even opponents admire him. But he is also fiercely competitive with a powerful compulsion to win, and that generates respect.