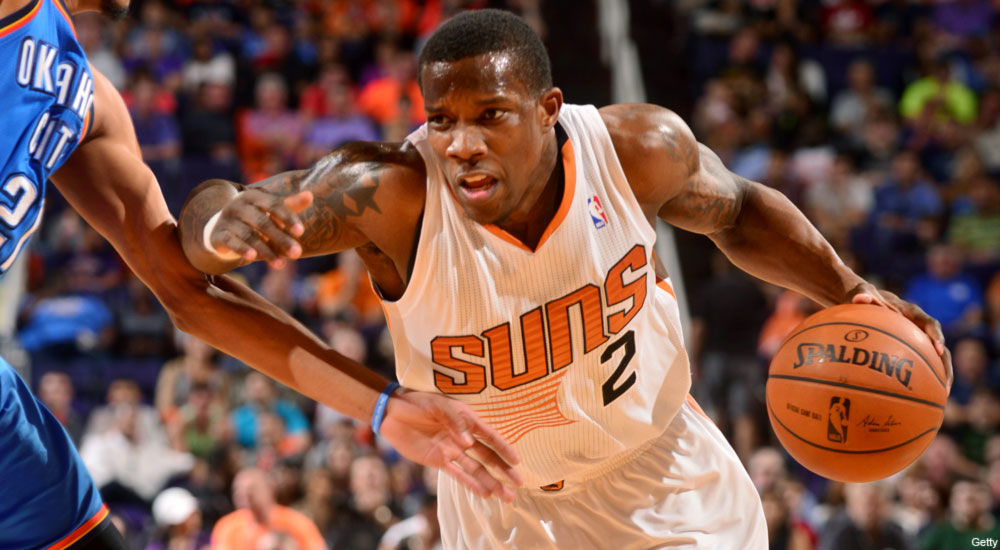 There is perhaps no player in today’s NBA player who has more questions surrounding his immediate and long-term future than Eric Bledsoe.

Is he worth a max contract?

Where will he play this season?

Can he stay healthy?

And those are just the most obvious, over-arching questions. Never mind the doubts about whether he can co-exist over the long haul with fellow ball-dominating guard Goran Dragic, the endless arguments about what position Bled really should be playing, or the rumors about what his relationship with LeBron James might mean for his future.

The 24-year-old has public co-signs from every NBA superstar from King James to Chris Paul, plus the blessings of since-retired vets like Grant Hill and Baron Davis. Yet he remains pro basketball’s version of The Riddler.

In his first season as a starter last year with the Suns, Bledsoe posted per-game averages of 17.7 points, 5.5 assists (with 3.3 turnovers), 4.7 boards and 1.6 steals in 32.9 minutes—all career highs. But he appeared in just 40 games, missing half the 2013-14 season with a shin and later a meniscus injury. It was just the kind of frustrating footnote that has followed EB over his first four NBA seasons: First he flashes with brilliance, then he goes down in a heap and disappears for an extended stretch.

Bledsoe is a freakish athlete, having earned himself a reputation as a lockdown defender and the pint-sized king of the chase-down block. His huge hands clog passing lanes and his python arms can frustrate players twice his size. At full strength, his motor churns faster than almost any point guard in the NBA. Sleep on D, and he’ll put your lanky ass on a poster, too.

But there’s no question that durability is a concern, and given the way Bledsoe throws his body around on the court a la smaller guards of the past (Allen Iverson the most notable among them), it’s hard to believe he can stay healthy for a full season as a 35-minute a night type guy. At least, until we see it once.

His unique, out-of-this-world athleticism at the point guard position makes us salivate each year around this time about what might come of his next season. Which leads to a familiar question—Will he finally “put it together?”

Before we get there, let’s consider just how startlingly young Bledsoe is. He won’t turn 25 until December, which makes more than a full year younger than Russell Westbrook and Stephen Curry, and only about six months older than Damian Lillard and John Wall. For as long we had to wait for Bledsoe to get out form behind Chris Paul’s shadow, it feels like he ought to be 28 (which happens to be Dragic’s age).

A year ago, Bledsoe recalled what he was like as an adolescent hooper in a feature for SLAM 174. “Determined,” is the word he chose to define his game during his formative seasons on the hardwood. “If I couldn’t do something, I would work 10 times as hard to get it,” he said. “I was a determined kid. Most definitely I was almost the smallest. I didn’t know how to play, but I knew to rebound, to pass.”

It was an honest take on his first few years learning the game of basketball. He’s taken on the game at the pro level with that same determination. And arguably, he’s still learning to move beyond the fundamentals—learning to run a team like, say, CP3, rather than relying on sheer muscle, hustle and high-powered wheels.

His three-point shot needs work (36 percent in ’13-14), but Bledsoe shot nearly 52 percent last season on two-point field goals, while assisting on 27 percent of his teammates buckets while he was on the floor with Phoenix last year. (Plus, you know, he’s been hanging out with LeBron this summer, so he’s got to get better just via old-fashioned osmosis, right?)

This isn’t about what Eric Bledsoe is worth in dollars and cents, nor is this about who his teammates are and what system he plays in. It’s about the fact that it would be very, very difficult to name 25—let alone 46—players you’d rather have as the key cog on a young squad. Go ahead and keep tabs on the rest of the names to follow on our countdown. Because save for a curiously brittle body for a kid nicknamed “Hercules” during his L.A. days, Bled’s upside still has as high a ceiling as nearly any of them yet to celebrate their 25th birthday (and not named Anthony Davis).