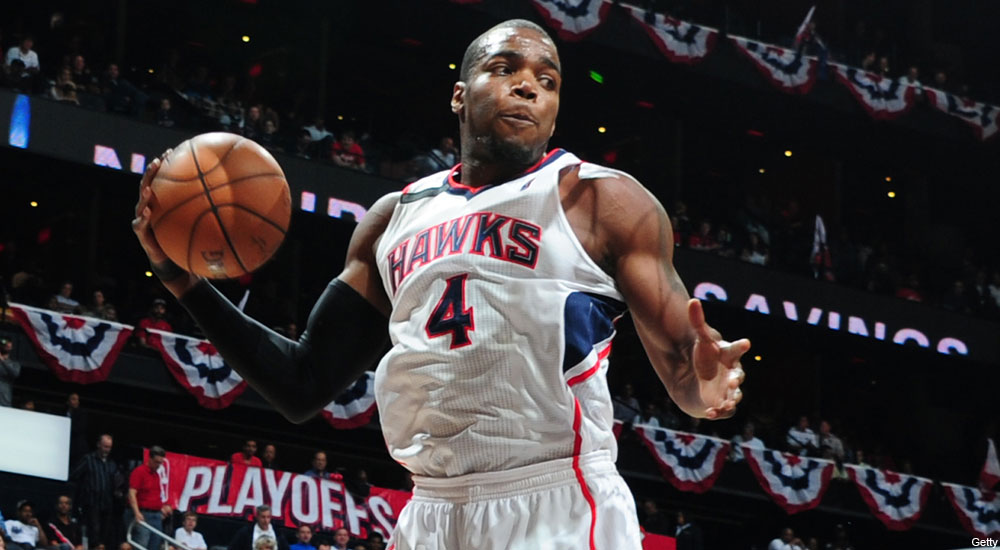 Even though this is Paul Millsap’s first appearance on the #SLAMTop50, the man isn’t the least bit nervous about being here. He knew this day would be coming for some time.

“I just realized I had to wait my turn,” Millsap told me back in 2011… Wait, 2011?! Yep, even when he was a Utah Jazz forward playing second fiddle to Al Jefferson, Paul knew that more was in store for him. “This is about opportunity and being patient. I was patient for years, and when the opportunity came… Well, I’m happy now.”

Three years ago, during a so-so Jazz season where the San Antonio Spurs swept Utah in the first round, Millsap had the opportunity to open some eyes. Night after night, folks around the NBA began realizing the dude was more than a big, agile body. He was smart. He was versatile. He was decent from 15 feet out. Of course, he knew all of this. Salt Lake City was up on it, too. It’s just that the rest of the world had some catching up to do.

After a 2012-13 campaign that saw Millsap’s numbers take a slight dip (14.6/7 from 16.6/8.8 the year before) and his team not even qualify for the postseason, another opportunity came Paul’s way—free agency. Atlanta seemed like a good fit for a host of reasons: an up-and-coming roster, a solid PG in Jeff Teague and a frontcourt mate, Al Horford, with a similar skill set. Things were perfect—until Christmas. On December 26, Horford’s right pectoral muscle gave out, subsequently putting the weight of the team on Millsap’s shoulders. Funny how stuff works out like that.

Last season was the first professional one where Millsap had to be the guy. Yeah, he had been the centerpiece at Louisiana Tech in the mid 2000s—Paul is the only person to lead the NCAAs in rebounding for three consecutive seasons—but bangin’ with the Boise State Broncos is a lot different than the Boston Celtics. Think Millsap twitched in the national spotlight? Not hardly. Paul essentially had another coming-out party for everybody who didn’t get the original invite in 2011. He dropped nearly 18 points, pulled down 8.5 rebounds, made his first All-Star appearance and proved the cornerstone of an Atlanta Hawks team that should have beaten the Indiana Pacers in the Playoffs.

The 29-year-old Paul Millsap doesn’t operate off should-haves, though. And he’ll prove that with another stellar performance. For starters, he’s got Horford back in the mix. Though his center’s still not 100 percent yet, early indicators show that Al’s body will be ready by the regular season’s tip. Having Horford in the paint will only do wonders for Millsap. With another All-Star on the court, the attention to Paul can’t help but tone down a notch, giving him a chance to improve on career-low shooting (46 percent from the field in 2013-14) and get even more comfortable beyond the arc (he averaged at least one three-point attempt per game for the first time).

And second, look at the other forwards on the Hawks roster—DeMarre Carroll, Mike Scott, Adreian Payne and Thabo Sefolosha. None of these are household names, but ask around the League and teams will tell you that crew is pesky as hell. No matter who’s on the court, there will be no let up. Carroll and Sefolosha are headaches on D. Scott has a respectable offensive game that demands attention. And Payne is just an all-around athlete who won’t be denied. Should everyone play their parts and stay relatively healthy, all the bumps, bruises and brutal double-teams reserved for Millsap a year ago will be cut down tremendously.

“Anything can happen,” Millsap told me. “It’s a long season. If things are going good, you try to continue for them to go good.”

Remember, Paul Millsap said those words back in 2011. We’re almost certain he feels similarly about 2014’s prospects. If things are going well for the Hawks, they’ll shake off the franchise’s black-eye of an offseason and make a deep run in the Playoffs. But if you think Millsap will be edgy about squaring off with Chicago or Cleveland in the postseason, you probably need to start this story over from the top.