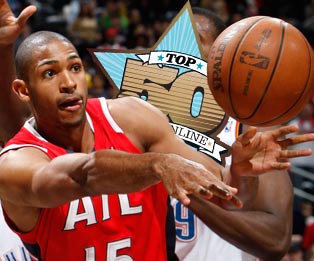 Every team needs a guy who goes out on the court and produces, day in and day out, regardless of how many touches he gets, who the opponent is, or how many headlines give him credit. One of my favorite sayings is ‘don’t talk about it, be about it.’ To me, that player and that saying, is Al Horford.

Horford came into the League NBA-ready after leading Florida to back-to-back championships. During his rookie season, he helped ignite the Hawks’ furious firs

t-round, seven-game series against the Celtics, who would go on to win the 2008 title.

The Hawks often feature iso-heavy offense, meaning that the lack of reliance on an inside-out scheme never revealed Horford’s full potential as an inside scoring threat. Last season saw his field goal attempts per game rise to just over 10 and he made a career-high 55 percent of those shots. While many of those attempts came from the 2.9 offensive rebounds he averaged per game, Horford also showcased a nice mid-range jumper.

Horford averaged just over 3 free-throw attempts per game, which will and should go up with more contributions on offense. His career-high 14.2 points and 9.9 rebounds led to his first All-Star selection; marking the first time since 1998 the Hawks had two representatives (Joe Johnson was the other).

Horford is faster and more athletic than the majority of the centers he faces, which gives him an advantage on the open floor. The Hawks in general could outrun and outlast most of the League. In an interview last season, Lakers guard Kobe Bryant described Atlanta as “probably the most athletic team that we face all year. Just all positions, they can all run…like a track team.” There has been a continuing debate whether Horford will return to his natural position at power forward, where he will match up with guys closer to him in size and athleticism.

The Hawks, devastated by the Magic in a second-round sweep in the 2010 Playoffs, changed very little about their roster this offseason. The core starters remain intact and Jamal Crawford (with a possible extension or trade up for debate) can provide sixth man spark. The big change is new head coach Larry Drew, who plans to implement a more versatile offense with less switching on D. We will soon see how much a revamped scheme affects a largely unchanged roster and whether Horford’s production could greatly benefit from a tweaked offense. If so, surrounding Horford with shooters like Johnson, Crawford and rookie Jordan Crawford could make the game easier for everyone and give the Hawks an unexpectedly effective inside-out game. The Hawks recently signed Etan Thomas, who can log some minutes at center along with Zaza Pachulia. Atlanta also has one of the most electric finishers in Josh Smith, who could create some serious mismatches if he spends time at small forward with Horford at the four.

So while Horford is ranked No. 45 for the upcoming season, the 2010 All-Star is quietly racking up double-doubles and waiting patiently for the spotlight. The Hawks’ best move would be to guarantee that Horford, eligible for an extension before the October 31 deadline, remains an integral part of the roster for years to come.