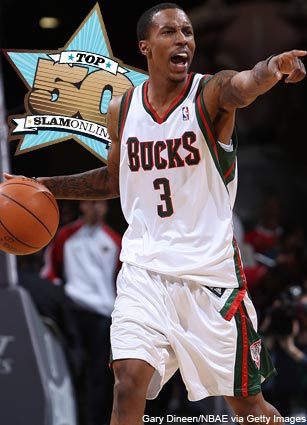 Happy Birthday, Brandon Jennings. For your 21st, you’re not getting a shot of Patron or a gold bottle of Ace of Spades or whatever it is you millionaires drink. Instead, you’re getting crowned as 37th best player in the L.

ck what you think.

I mean this in the best possible way.

The reality is, though, that when it comes down to it, Jennings is like a meat-wearing Lada Gaga on stage at the VMAs. And no, I’m not saying that simply because, like her, he dances to Lady Gaga music.

He does it his own way. “It,” in this instance, can mean any number of things. It can mean going overseas; scoring 55; lofting 20-something shots; perfecting a running floater; knocking down what you thought was a questionable three-point attempt; coming out fashionably late to your own Draft; blogging with SLAMonline during the Draft the following year; playfully and incoherently running your fingers across the keyboard and sending it out as a Tweet; saying that your sneaker allegiances held you back from getting a Team USA tryout invite.

I know you’ve heard it all before—blazing trails, taking the uncommon path—but it remains an important enough reality of all that Brandon Jennings brings to the table that it can’t be overlooked.

(Actually, Rome is in the central part of the country, but whatever.)

The southpaw’s rookie year certainly had its ups and downs. Most Year One’s do. Getting to the Playoffs had to be the highlight. Going out the way that he and the Bucks did surely sucked, but he was in a position that no other rookie of true consequence was in last year; Jennings played into May.

Of the other top rookie guards from last year—a group that we’ll say includes Brandon, Steph Curry and Tyreke Evans—Milwaukee’s point guard played the most games. And that’s not just because he’s the only one who played in all 82 regular season games, although that happens to also be true. It’s cause he was the starting point guard for a playoff team.

This isn’t to say he necessarily should have won Rookie of the Year, although some people did believe that. The argument from those who felt that way was sound, however, in that it placed the utmost importance on being a floor general for a winning team. At the end of the day, sports are about winning. But that’s the past and it doesn’t really matter.

BJ’s stats were solid last year: 32.6 minutes, 15.5 points, 1.3 steals, 5.7 assists and 1.8 threes per game. Expect those, along with his subpar shooting percentage, to jump this year as he continues to gain more experience.

Expect the Bucks to make a jump this year, too. And expect the calf muscle to be their point man.

Jennings and the Bucks aren’t merely shooting for a repeat of last season’s somewhat surprising run. They’ve got their eyes on the Central Division crown, and it’s not as far out of their grasp as you may think. We all know what happened to the Cavs. The Pacers are still a ways away, and Detroit may not be on the upswing quite yet. So that leaves the Bucks and the Bulls. Packed with their free agent signings, Chicago is a phenomenal team to play with in a video game (believe me, I’ve updated my 2K10 rosters).

But the Bucks are poised to keep climbing. They’ve got one of the deepest teams in the League, one of the few legit centers around, a coach who has proven that he knows what he’s doing, and a solid defensive philosophy.

Oh, yeah, and they’ve got this dude who runs the show for them who, while getting better as we speak, brings confidence, personality, fearlessness, scoring, court vision and a whole lot more to the floor every night.

When I spoke with dude earlier this year for our March cover story, he told me that his goals for last season were to reach the Playoffs and help Andrew Bogut become an All-Star. One outta two ain’t bad. But two out of two—hell, even three out of two (Jennings as an All-Star being my invention as the third)—are possible this season.

If his past has been any indication, Brandon will do something that is, in the very least, semi-controversial, that will make headlines at some point this season. At the same time, he’ll be helping the Bucks stack up the Ws. So all that other stuff will, still, be none too important.

He’s got “Young Money” tatted on his back and, like another Young Money phenom—the one who raps for the Young Money label and makes radio hits seem as simple to create as break and bake cookies—he gets it done his own way.