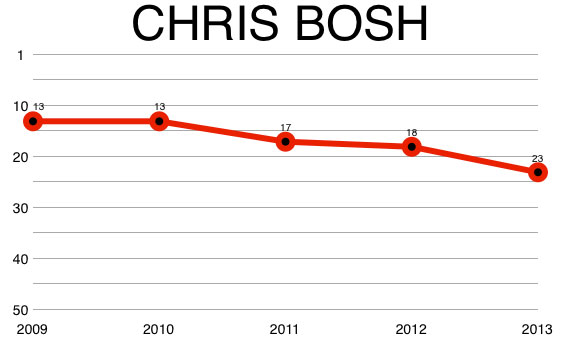 The big men are back.

And then there’s Chris Bosh.

A guy who, based on last season’s evidence, just doesn’t fit. Doesn’t fit at his position, and quite possibly doesn’t fit on his team.

This time last year, in Bosh’s 2012 Top 50 profile, I wrote that his switch to center would make him the weapon that the Heat needed in their quest for another title—a different offensive option, another problem for the defense to deal with. Opposing bigs would have to decide whether to guard Bosh’s outside shot, or to fill the lane to cover LeBron James and Dwyane Wade.

Turns out it wasn’t that much of a dilemma.

Nobody could stop James, no matter what they tried, while the League’s improving band of centers had the measure of Bosh’s game—daring him to hurt them outside.

His mid-range game was still effective when he got the looks, but his efficiency in three-point territory let him and his team down. Bosh attempted twice as many three-point shots last season as he did in ‘11-12, but only made 28 percent of them.

His regular-season averages of 16.6 points and 6.8 rebounds were the lowest since his rookie year, but more than the numbers, anyone who watched the Heat could see that he just wasn’t making an impact out there.

It was never clearer than in the Playoffs, where Bosh faced up against both Hibbert and Duncan, and got taken to school, with many calling for an off-season shake-up of the Big Three. It’s easy to forget CB was even on the floor when the Heat took home their second straight Championship, after an epic seven-game series in which he was largely a non-factor, and Duncan rolled back the years.

So where does Bosh go from here? We’ve got him at the 23-spot in this year’s Top 50, which is nothing to be scoffed at, and he’s the proud owner of two rings, so it can’t all be doom and gloom for one of the most entertaining personalities in the League.

The man himself has said that his goal for this season, in which anything other than a third consecutive title will be considered a failure for Miami, is to be more aggressive—to take more opportunities to attack and impose his game on the opposing team.

To do that, he’s going to have to take smarter shots, particularly in three-point territory, where he will continue to get good looks, and force the other team’s bigs to adjust to him, rather than the other way around. He has to find a way to open things up for James and Wade, and he’s also going to have to be true to his word and get aggressive—it might not be his natural game, but unless Miami pulls off a miracle and manages to get Greg Oden fit and contributing, the Heat need Bosh to make an impact in the paint against the likes of Hibbert and Duncan.

This time next year, we could be looking at a guy who regained his spot in the top 20 on this list after averaging 20 and 10, making another All-Star team, and helping the Heat win a third consecutive NBA title. If not, there’s every chance the guy who didn’t fit won’t have to worry about being Miami’s third wheel—he’ll be moved on to make room for LeBron’s next Big Three. As a Chris Bosh fan, I hope that isn’t the case.