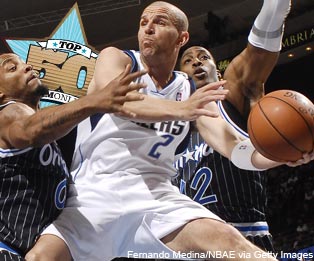 On last year’s Top 50 rankings, Jason Kidd ranked 45th. This year, the savvy veteran point guard of the Dallas Mavericks has moved up a spot. That may not seem like much of a jump to you, but it’s quite impressive for the oldest guy on the list to move up, let alone remain in the Top 50 at all. But at age 37, the Kidd formerly known as Ason is still running offenses to a tee. And at age 37, he is still better suited for the p

osition than most point guards in the NBA.

Has Jason lost a step? Sure. But it’s not like he’s breaking down. He’s still more durable than most point guards, playing in at least 80 games the last five seasons and also averaging 36 minutes a game last year, sixth amongst point guards.

And the Kidd isn’t taking up space at his ripe old age either. Jason’s first season (‘94-95) was the last and only year in which he finished outside the top five in assists. No difference last year, folks — his 9.1 assists per game was good for fifth behind only Steve Nash, Chris Paul, Deron Williams and Rajon Rondo. The court vision is still there. The speed? Eh. The J? Eh. The defense? Eh….it hasn’t improved with age, but he’s still one of the better defenders at the position.

So how do you stick around like JKidd has all these years? Clearly the 10-time All-Star has kept in great shape, but his decision making seems to be just as keen as it was in the ’90s. Out of those top five assist leaders, Kidd’s 3.71 assist-to-turnover ratio was second only to Chris Paul, who played in just 45 games for the Hornets last year.

And maybe, for Kidd, his ability to stay up there with the best, year in and year out, goes beyond the stats. Maybe it’s a matter of hunger. Now in his second stint with the Mavericks, Jason isn’t spending his twilight years fading away from relevance on a sad team, but, instead, he runs a squad that has legitimately contended for the last decade. And the expectations shouldn’t diminish for ‘10-11, where the Mavs will get Caron Butler and Brendan Haywood for a full season in addition to the core of Kidd-Dirk-Terry-Marion.

Dallas is still one of the best teams out West, but those four ain’t getting any younger and you can’t help but think that their window is closing. And like his team, Jason’s first championship ring still eludes him, and that has to be so frustrating for a 16-year vet who hasn’t missed the Playoffs since 1996. Kidd’s 121 playoff games is by far the most of any active player who has not won a championship. Nowitzki is a little bit behind Kidd at 103 playoff games, so you know there’s no shortage of desire amongst the two Dallas stars for the upcoming season.

Jason has the stats (10,923 career assists, second only to John Stockton), the All-Star pedigree, and plenty of numbers to ensure him in a spot in the Hall of Fame someday. So now, for Kidd, it’s about one thing and one thing only — that Larry O’Brien. And whether or not he gets his hardware someday, and whether or not you think Kidd should warrant this No. 44 ranking, it’s impressive that this 37-year-old is still getting the respect and recognition as one of the best.