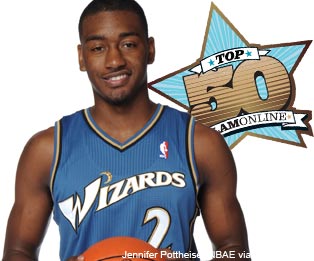 “What?! You can’t put a rookie on this list! He’s done nothing!”

Whoa, whoa, whoa. If this is how you feel, just stop. Here at SLAMonline we believe John Wall not only belongs in the Top 50, but also could end up being much higher on the list by season’s end. The SLAMily thinks Wall will join (and possibly even surpass) the upper echelon of young point guards in the League. Chris Paul, Deron Williams, Rajon Rondo, Derrick Rose, Russell Westbrook, Tyreke Evans and Bran

don Jennings. Wall’s name will fit-in seamlessly with this group.

Nobody likes to give a rookie too much credit before they’ve even met Dick Bavetta. But we’ve stared into our crystal ball and we see a Wizard with a 6-9 wingspan collecting a defensive rebound, flying past everybody on the court, and finger rolling at the front of the rim. Something like ’96 when Allen Iverson first stepped on to the NBA hardwood with a speed that seemed new to people’s eyes. Wall is going to invigorate basketball in Washington DC and keep the Verizon Center buzzin’ all season long.

The Wizards sure lucked out when Irene Pollin, wife of beloved former owner Abe Pollin (who passed away last November), accepted the grand prize at the NBA Draft Lottery in May. It was exactly what new owner Ted Leonsis needed to pick the franchise up after a catastrophic season, in which not only the owner died but also their superstar Gilbert Arenas briefly lost his mind. After everything swiftly unraveled, team leaders Caron Butler and Antawn Jamison were traded away.

Wall joins AI and Rose as the only guards drafted No. 1 overall in the last 30 years. There won’t ever be another AI, but many have closely compared the two former John Calipari recruits. They have very similar repertoires. Both can pull-up and nail the elbow J. Their running floaters in the lane are dropping. They each execute the fast break at a pace quicker than most people can conjure a basic thought. Some say Wall is “Rose with charisma.” Yes, Wall is the one much more likely to create a worldwide dance party or to simply do the Dougie. Anyway you look at it, they’ll probably be the fastest two guys in the League next season. So go ahead and circle the dates that the Bulls and Wizards face-off right now: November 13, December 22, February 28 and March 15.

We got a taste of how the NBA version of Wall would look during the Las Vegas Summer League, in which he was named Most Outstanding Player, averaging 23.5 points and 7.8 assists in four games. He turned the ball over 16 times in the first two games so he’ll have to be more careful with the rock. He also has some improving to do on his outside shot as he was off-target on 7 of the 8 threes he attempted. A number of his dimes went to Wizards center JaVale McGee who is one of the young players coach Flip Saunders has to build around Wall. The team looks fit to push the tempo with athletic players at every position. The most challenging thing for Saunders will be to prevent three-time All-Star and former face of the franchise Arenas from dominating the ball. Something tells me that won’t be an easy thing to do, but hey, Gil did change his number for the upcoming season so maybe Agent 9 is more willing to play a secondary role.

Number 47 seemed like a safe place to put a rookie on this list. As previously mentioned, you can’t go giving a rookie too much, too early. But this will probably be the last time John Wall is ranked No. 47 on any list.