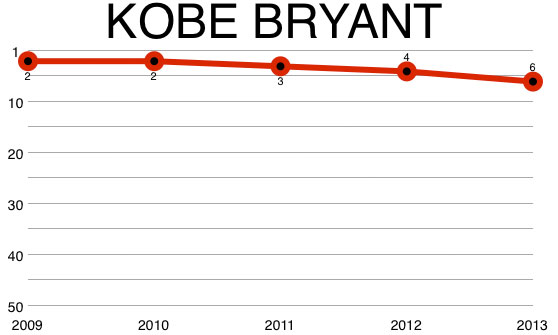 It’s 4 a.m., Kobe Bryant is off somewhere drinking mule sweat or something, and he is not happy.

He’s not happy because for the first time since Michael Jordan left the NBA, he’s going into the season as the second-best shooting guard in basketball. Or third. Or fourth. He is pissed. He is probably spitting out the mule sweat.

He’s getting the best treatment in the world. It’s probably illegal. He’s probably going to turn green by the time he’s 57. Technology is incredible, but technology sucks compared to how badly Kobe wants to play basketball again while he can still win a Championship by himself.

Depending on what reports you’ll read, he’ll be back on opening night. Or by Thanksgiving. Or by Christmas. Or he’ll take the year off if they’re tanking. (By the way, you be the guy who has to tell Kobe that he’s not playing this year when they’re 7-15. I dare you.) This is the reason he’s No. 6 in the SLAM Top 50, and not No. 2 or 3. This is the reason there is a Rocket with a beard and a better coach ahead of him somewhere on this list.

If you want proof, you should probably revisit the night his achilles chose not to keep up with him anymore.

I was in a bar in L.A. when this went down, because that is the place you hang out, alone, almost every night of the week when you’re a New York Giants fan. When he limped off (for the second time that night, mind you—he’d gotten kneed in the thigh earlier, and that looked worse), there wasn’t a hush. It wasn’t like the movies. There was no record screeching. The bar was too loud for that.

But one guy did yell this: “Oh, JEEE-ZUS CHRIST.” Just like that, all big and Ron Burgundy and guttural like that. There aren’t many epiphany moments out there in the universe, but this guy very quickly came to the realization that this team was now Dwight Howard’s team, and Dwight Howard doesn’t like playing basketball.

The Lakers needed to win nine of their last 10 to make the Playoffs. They did it and because this was the stretch Kobe had before he went down: In his last seven games, he dropped 28.8 ppg, 8.3 apg and 7.3 rpg. The Lakers won six of them. He played 43 or more minutes in all of those games, and at least 47 in four of them.

And then his achilles gave up because no one should be doing that kind of thing at 34.

The Lakers made the Playoffs last year, but they didn’t show up. They didn’t have their rock anymore. Looking back at it, there’s no non-emotional reason the Lakers should have stopped competing in the first round against the Spurs last year.

Pau Gasol was there and healthy and waiting for someone to use his high screens. Steve Nash was wearing a walk-in freezer on his lower back to keep it cool, but he was still available to run an offense. After a decade in the NBA, Steve Blake figured out that he should’ve been a shooting guard that whole time. Metta World Peace was his normal defensive lunatic self. Dwight Howard was present, technically, in the the physical sense.

To recap, that’s one definite Hall of Famer, two potential Hall of Famers, and a guy who plays defense like Lenny from “Of Mice and Men.” Still, after Game 2, they just quit.

After Game 3, when the Lakers lost by 31 to the Spurs at home and L.A. started Andrew Goudelock and Darius Morris in their backcourt, Mike D’Antoni said this quote, verbatim: “We’ll play as hard as we can play and hopefully it’ll work out a little better.” He wasn’t even hoping his team would win the next game, he was hoping things would work out better if they played as hard as they could.

Why? Because Kobe Bryant wasn’t on the floor anymore. That is it. That is the only reason.

Kobe Bryant is the Lakers. That’s not stopping this year. Rankings on the Internet don’t matter. If he plays, L.A. will get hot and scare the West. If he doesn’t, they’ll be hunting for Randles and Wigginses. It’s that easy.

And by the way, tell him he should be ranked worse than sixth on the SLAM Top 50. See what happens.