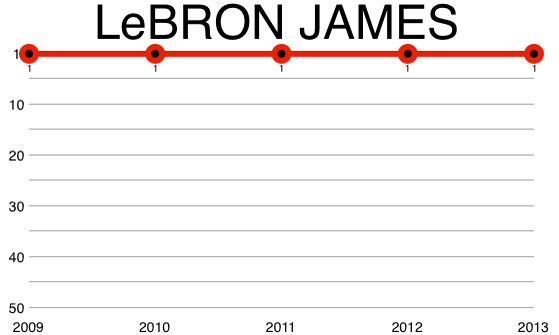 The reality is pretty simple: LeBron James is the best player in basketball, and we’re not exactly in the position to argue with simplicity in this moment in time.

So James—like Shane Victorino leaning into an inside fastball—is the safe choice, the sure thing, a four-time MVP boasting talents that most people can agree (or agree to disagree) upon; for better or worse, an era-defining basketball player whose highlights and career talking points are served with your late night snack or morning coffee. Your opinions are your opinions, but standard-setting in the digital age of sport is something that LeBron seems to be chairing by himself, in this country at least.

So unless Kevin Durant shoots the ball so well that the NBA honors Antoine Walker by adding fours, or Chris Paul finds a way to play with an extra member of the Player’s Association invisibly setting back screens, that isn’t likely to change.

It’s the quest for a third ring that, in the interim, will muddy up the reflection in Bron Bron’s legacy mirror, a sheet of mostly pristine glass hanging on a wall somewhere between Akron and Miami—or even in Pennsylvania, because Pennsylvania is a swing state too, and if there’s anything a generation of millennials forever linked with the ’03 Draft class has learned, it’s that any election can feature binders full of women, Bushes, Dicks, Chads and/or malfunctioning voting booths.

I really like bringing up that last one in part because it highlights the difference between LeBron the growing global entity needing to prepare for the start of his second season after missing the Playoffs and LeBron the NBA finalist actually getting out to support Obama and help rock the vote four years later.

It’s not really a matter of taste, more about understanding power because the world’s best basketball player wields all sorts of cultural and stylistic clout.

It’s a bit of a situation to contemplate: ADD-addled ’80s babies fall in love with basketball and come of age by habitually ignoring a country’s politics and lessons in the classroom while remaining enthralled with the exploits of an athlete whose moniker is fit for biblical monarchy and thus demands singular focus. You can’t figure out which phone you want to buy, but you’ll drop everything to talk about King James when he’s leading SportsCenter.

Which is why it seems regular-season NBA basketball—and its 6-8, 250-pound torch-bearer—returns in full swing in November: to own the night and save the day, or maybe just to preserve the status quo so a World War isn’t fought because some bored kid downloaded the Grand Theft Auto 7 ‘This Is Real Life’ app for Android.

Now, about that Championship chase. Is LeBron slated to walk the path of his popularity predecessors (one, two, three rings) or is his journey more detailed, with new and different stops?

No idea. I’ve never wined and dined with Gregg Popovich the movie Sideways, or attempted to ward off a Paul Pierce-Kevin Garnett-Brook Lopez-Andrei Kirilenko quadruple team, or thumb-wrestled Metta World Peace inside of a live bear.

If the past is any indication, the third ring is not easily attained and often the quest is absurd, both in the hurdles tossed at the protagonist and the protagonist’s ability to escape near-certain elimination.

Sometimes—as with the ’89 Lakers, ’91 Pistons, and ’96 Rockets—fans and history are spared trilogies that were simply not meant to be. I mean, can you imagine Hakeem Olajuwon leading the Rockets past the 72-10 Bulls? He would have had to do it in REM sleep, right, Eternal Sunshine of the Spotless Dream Shake—something along those lines, no?

About those who have conquered three the hard way, consider: On the night Charles Smith had his shot repeatedly rejected underneath the rim during Michael Jordan’s first three-peat quest, Jordan—jumping and pumping his fist in pure jubilation—might have set his personal best for the emotion ‘ecstatic’ while darting into the Madison Square Garden tunnel.

Or what about that sinking feeling in your stomach when Vlade Divac knocked the ball over to a wide open Robert Horry, spilling an entire bowl of Lucky Charms on the Staples Center floor and helping to send the Shaq/Kobe Lakers to their third consecutive title?

Those are two just standout examples.

So what are LeBron’s Heat up against? You already know the nuts and bolts. The Pacers will likely be improved. The Bulls have Derrick Rose back (playing in actual basketball games). When Deron Williams comes back, the Nets’ depth casts a longer shadow than the summer sun in northern Scandinavia. The Knicks are weird and unpredictable. The West has a few contenders too, and let’s dismiss them in this space just to piss them off.

As for LeBron’s supporting mates, what exactly is each lacking? Last season, a member of the Heat spoke to me about how bored he felt. It was December. They might very well be getting that itch a lot this season.

Wade brought them to his house, and he has more moves to make.

Ray Allen hit the biggest shot of many, many lifetimes last June.

Mario Chalmers may still feel unloved or project that very feeling, which is why we here at Mario Chalmers Karaoke are here to make sure that you get to sing the song that you want to sing.

When it comes to rings, Chris Bosh already has what his silly detractors said he never did (a pair).

And Shane Battier will eventually take a GM’s job with that new expansion franchise in Albuquerque and bring Willie Beamon with him.

On some level, all of the above hokum renders this season a referendum on trilogies and LeBron (or, um, trill OGs and LeBron).

But that’s only on some level and LeBron wants to be the greatest ever which = some level + all the other levels. And, as LeBron himself noted, that’s currently a ways away.

All that noted, whatever happens this season with his mates, LeBron James is still the best player in the League, just as he was at the beginning of this post, and you could make the argument in 11 words instead of eleven-hundred.