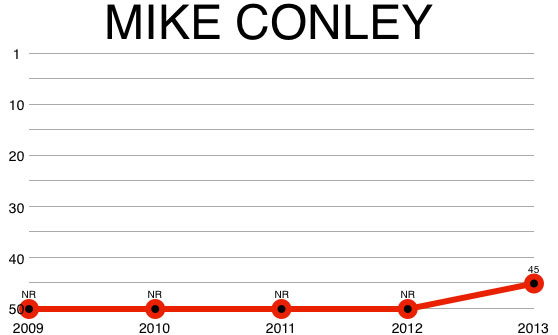 At the start of every NBA season, we like to label players and put them into boxes. But Mike Conley has been making that a little more difficult lately. He was able to shake off the “guy-with-all-the-potential-but-never-lived-up-to-it” label that hovered over him for the past few years, by substantially surpassing expectations this past postseason.

So what do we call him now?

An elite point guard? A top-10 point guard? A superstar in the making, even? Depending on who you talk to, he could be one, none or all three. But what’s undeniable is that he’s integral to the Memphis Grizzlies’ chances for another deep playoff run in the upcoming ’13-14 season.

Conley has reached a critical point in his career. Will he match his post-season productivity or will he return to obscurity? Will he finally make the jump in people’s minds as part of the upper-echelon of the NBA’s point guards?

A lot of it comes down to winning. Or maybe not. You’d think he might be ranked higher than No. 45 in SLAM’s Top 50 after putting the Grizzlies on his back at times for a franchise-record 56 regular-season wins and a trip to the Western Conference finals.

Maybe there’s just a bigger pool of point guards to choose from now, making it tougher for someone with quiet confidence like Conley to stand out. No longer is the position solely dominated by the likes of Chris Paul, Tony Parker and Rajon Rondo. The League is populated with more elite point guards than ever before.

Conley seems most poised for another standout season because he’s a game-changer. When Rudy Gay was traded to the Raptors in January, Conley thrived with new freedom at the point, proving he could take over games. Big games.

In Memphis’ 99-93 Game 2 road victory over the Thunder in the Western Conference semifinals, Conley’s near triple-double (26 points, 10 rebounds and 9 assists) showed that he doesn’t run from pressure situations.

It wasn’t just one night. He raised his game consistently when it mattered most—upgrading from a regular-season average of 14.6 points, 6.1 assists and 2.8 rebounds per game to a playoff line of 17 ppg, 7.1 apg (fourth in post-season apg) and 4.7 rpg. (He did have a weak spot, though, shooting 38.4 percent from the field.)

Conley’s value this season, however, will be measured by more than pure numbers. He can change the game in more subtle ways, and will look to do so as one of the more complete point guards in the NBA. He can pass, score, defend, shoot and run an offense.

Not an in-your-face, flashy kind of PG, Conley can orchestrate his team’s offense while simultaneously disappearing into it, letting the frontcourt of Zach Randolph and Marc Gasol take over. They trust that he will get them the ball. That’s a big deal for someone who couldn’t be trusted to play starter-level minutes a few years ago.

Now, Conley doesn’t seem rushed when he has the ball. Especially when he initiates a screen. And if a high double team pushes him farther away from the basket, he already knows who he’s going to throw it to or what lane he’s going to take before the defense reaches him.

He could be among the NBA’s leaders in assists this year. He edged Chris Paul in that department in the first round of the Playoffs, dishing out 8.3 a night compared to Paul’s 6.3, stealing the series from the Clippers in six after an ugly 0-2 start.

Conley has even more upside on the defensive end. As an All-Defensive Second-Team selection, he averaged 2.18 regular-season steals per game, which ranked third in the League, to go along with an NBA-best 174 total steals. The better he gets, the better the hard-nosed defense of Memphis will be.

Some call Conley underrated. And he is. But that characterization suits him right now because he’s still evolving, still getting better.

His last game was telling. He was held to 9 points (with 7 assists) on 30.8 percent shooting from the field against Parker and the Spurs in Game 4 of the Western Conference finals. He watched Parker steal the show with 37 points on 15-21 shooting.

That night doesn’t take away from Conley’s other performances in the series, or in the Playoffs as a whole, but it does show how far he needs to go until he becomes the point guard he strives to be, the point guard that Parker spent twice as many years becoming.

Conley’s near-triple double against the Thunder prompted Tony Allen to say: “Mike Conley is now one of the top-five point guards in the league, whether anybody likes it or not. I know a lot of people have got their favorites, but Mike Conley is in that conversation now.”

Conley’s somewhere in the middle of all of the hype. He’s shown tremendous upside while at the same time comes into this season still having to prove that upside. He’s in the “conversation,” as Allen said. Now it’s up to Conley to keep speaking up. 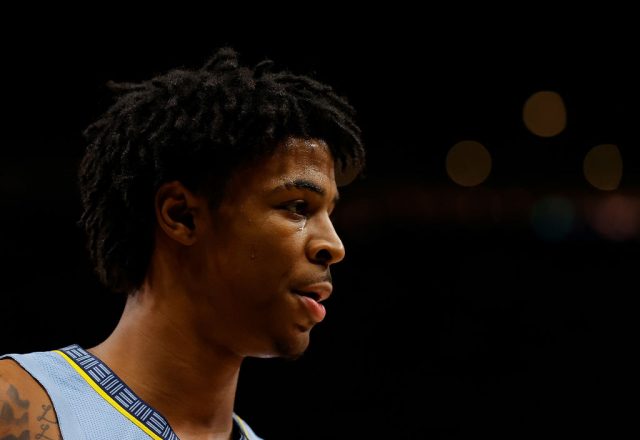