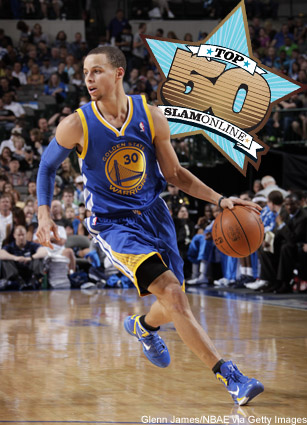 Since joining the Phoenix Suns in 2004, Steve Nash has demonstrated how tough it can be to guard point guards who can both shoot and pass at an elite level. Players like Nash make pick-and-rolls nearly impossible to defend, force constant defensive switches and get opposing players in foul trouble. To put it simply: point guards who can shoot create havoc for a defense.

Which brings us to Stephen Curry.

At just 23 years old, Curry’s game is far from complete. But after just two NBA seasons, the baby-faced Davidson graduate is already among the best shooters in the NBA. Is he at Nash’s level? No, not yet. But he’s closer than you probably think, and is already a better shooter than nearly every point guard (the list of great shooting point guards is shorter than most realize), and player, in the NBA.

Curry, however, is not just a shooter. Yes, it’s his bread-and-butter, and the skill that got him on to the Top 50, but in his short career, the Warriors guard has also shown that he’s got other talents to go with his textbook jumper. For starters, Curry is a good passer. Not necessarily a great one, but he’s better than he gets credit for. At 6-3, he has the ability to see lanes and angles that many point guards can’t, and while assists can be a flawed statistic, Curry still managed to average 5.8 per game last year while sharing point guard duties, and the ball, with Monta Ellis.

You also have to give Curry at least some of the credit for the Warriors’ offensive efficiency. He might not play a Nash or Chris Paul role, but for the most part, Curry is still the floor general of one of the better offensive teams in the League. That has to count for something.

Of course, any discussion about Curry and his skills also has to touch on his deficiencies, which, in this case, would be defense. We can all agree that Curry is not exactly a defensive savant. The only point guards in the League who I’m confident Curry can guard are those like Mike Bibby and Jason Kidd, who, at this point in their careers, seem to be allergic to the paint. And yes, a poor defensive point guard can kill a team and lead to issues on both sides of the court.

But offensive proficiency can often make up for a majority of these problems, as it has with Nash, and while Curry may be a poor defender now, there’s no reason to assume that he will be for the duration of his career. After all, he’s still just a 23-year-old who played one of his two NBA seasons under defense atheist Don Nelson, and comes from a college where he was told to save all his energy for the offensive end.

With former point guard Mark Jackson (a guy who has labeled himself as a coach who will stress defense) now at the helm in Golden State, it’s safe to assume that the defensive end of the court will no longer be a rest area for Curry. If nothing else, I can guarantee that after practicing for a year (fingers crossed) under Jackson, Curry will never again leave his “hand down” on defense.

What it all boils down to with Curry is how much, and how quickly, he can improve. He’s already got one elite skill, which is enough to thrive in the NBA. The question is whether Curry ever rounds off his game to the point where he is able to become one of the League’s top-five point guards.

If Curry can continue to take these steps, and truly dedicate himself on the defensive end, next year’s rankings will have Curry in the top 25, and, more importantly, leading a Playoff-caliber team.