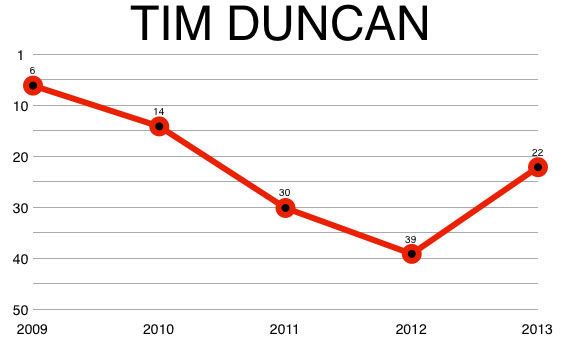 Before we get rolling on this ode to Timmy D, here’s a not-so-bold prediction for the ’13-14 regular season:

The San Antonio Spurs will be overlooked. Written off. Overshadowed by those flashier squads, the superstars in Miami and Houston and OKC.

Count on it—Timmy, Tony and the rest of those boring Spurs will be largely ignored for most of the year, flying under the national radar, even as they blitzkrieg much of the Western Conference and pile up win after impressive win.

It happened last year, and it will almost certainly happen again this year. The media-at-large will declare—and not entirely incorrectly—that San Antonio’s key players are too old, too creaky in the joints, too ponderous for this modern-age, uber-athletic NBA.

But the Spurs (and we must speak of them collectively, for the Spurs are uniquely collective) won’t give a damn. They’ll make the Playoffs, of course, and they will probably win a couple of rounds in decisive fashion.

Hell, there’s no reason San Antonio can’t climb all the way to the NBA Finals once again next June. Gregg Popovich is still the coach; newly crowned EuroBasket champion Tony Parker is still quick as ever. If Manu stays healthy and returns to his usual form, he’s a first-rate weapon. The rest of the roster is stocked with solid young talent.

And then, as always, there’s Tim Duncan. The Big Fundamental will lead the way, because Duncan always carries the banner for the San Antonio Spurs, every single year, season after season.

Since the SLAM Top 50 is the definitive ranking of the NBA’s best players, I will definitively opine that Timmy D is still the best power forward in the L. Not the most “fundamental,” not simply the most decorated. The best.

The numbers speak for themselves. Last season, at the age of 36 (he turned 37 in April) Timmy shot over 50 percent from the field, averaged 17.8 points per game and grabbed 9.9 rebounds per game. In the Playoffs, against the Lakers, Golden State and Memphis, he upped his output to 18.1 points and 10.2 rebounds per game, to go along with 1.6 blocks per.

In the Finals versus the Heat, Duncan toyed with a vulnerable Miami front line, owning the paint through seven hard-fought games. He scored 30 points, grabbed 17 rebounds and hit 4-5 from the free-throw line in the Game 6 loss at Miami. In Game 7—another valiant losing effort—he showed up again, this time to the tune of 24 and 12. It wasn’t enough to win his fifth ring, but he sure gave it a go.

Those Finals performances were so spectacular, and Duncan, despite his “advanced” age and worn-out body, was so dominant, that people sort of forgot he’d been doing these things for years. His career is littered with accolades—four rings, two League MVPs (’02 and ’03), three Finals MVPs, perennial All-Star appearances and multiple campaigns with Team USA.

Statistically Duncan is one of the best of all time. But there are other, less quantifiable ways to measure an athlete, and Duncan brings more than skill to the table. He is a leader and a winner, the kind of man who shuts up and goes about his business.

Ever since Wake Forest coach Dave Odom recruited a skinny young swimmer from the US Virgin Islands, Timmy has been leading teams into battle.

At 6-11, 255, Duncan is a big boy, but he’s no behemoth. He scores unspectacularly, and often fundamentally. The jab-step and bank shot from the low post is his calling card—no one is better off the glass.

Defenders may try to body him up, but Duncan will spin and launch a little hook shot, or drop step, or face and fire. Double him and the Big Fundamental will not be intimidated; he’ll just wait until a teammate gets open for a three or cuts into the lane. Then he will throw a perfect pass, because he is a world-class passer (3,612 career assists).

Of course, he’s also pretty good at the standard mid-range jumper from the foul line.

Duncan’s critics (you’ve heard them for years, now) argue that while Duncan is certainly a great player he is unfortunately a dull player, because he rarely dunks, he’s not very quick and he doesn’t shoot from range.

Balderdash, say I. Not everyone is LeBron or KD; not everyone can throw down a vicious windmill. And that’s OK. Because Tim Duncan, throughout his many years in the NBA, has shown us time and again that good fundamental basketball, played in synch with your teammates, played smartly and surely from the free-throw line inward, can be very entertaining and fun to watch. Maybe even beautiful.

So go ahead, write off the Spurs. Tell them they’re too old.

Just remember that Timmy D, 37 years young, is still roving that paint, and he’s still got some work left to do.