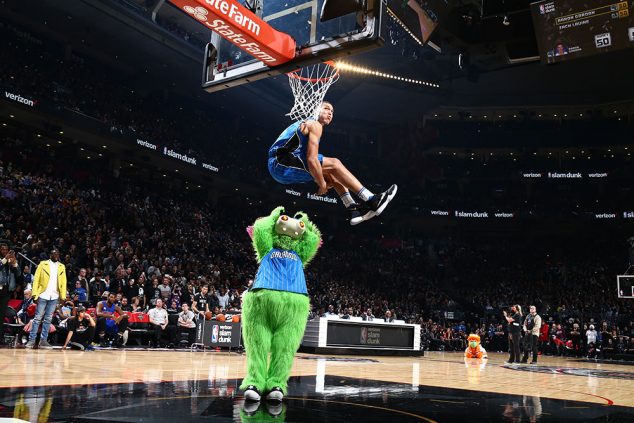 Imagine for a moment that you are Stuff, the Orlando Magic mascot, a fantastical dragon with pink wings and “party blowers” that emerge from your nostrils. Hatched from an egg in 1989, you are the longest-tenured member of the Orlando Magic outside of senior VP Pat Williams. Those googly eyes have seen much. And for many young Orlando Magic fans, you are the wildest thing they’ve ever seen.

But wait. You are asked to assist someone over All-Star Weekend, a player who was born in 1995—six years younger than you—as he competes in the Dunk Contest. Which is fine, you’ve seen dunk contests before. Lots of dunk contests. Hell, you watched Shaq for four seasons. Dunking, right, whatever.

So you go. You help out. And on Aaron Gordon’s second dunk, he takes the ball from you, sits down with his butt a full seven feet above the ground and passes it underneath his legs before slamming it home.

You can only stare. For once, you know exactly how those young fans feel.

Nuggets, Aaron Gordon Optimistic On Extension In Near Future