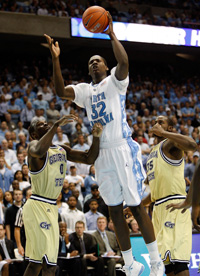 While many things have stayed pretty consistent in the city of Detroit for the past decade, others have taken a big hit. Coney Islands are still popular, Belle Isle is still the hotspot, Detroit Tigers hats are still essential, and despite his untimely demise, rapper Blade Icewood still manages to get the crowds hype in the clubs.

The Detroit Pistons, that’s another story…

“I think that we’ve drifted from who we were. I think that we didn’t play with the same grit and toughness that we’ve played with over the past 10 years,” Pistons’ President of Basketball Operations Joe Dumars said in a recent press conference. “That’s the whole focus right now for us is to get back to the grit and toughness that’s identified us for the past decade!”

Honestly, I don’t feel as though one draft pick will help them regain their old-school aura but I do feel one player can potentially push them in the right direction. After spending a hefty amount in the free agent market last season on Ben Gordon and Charlie Villanueva, the franchise is aware that this year’s draft pick will be very important. Gordon, was one of the top free agents of the summer when he signed a $55 million, five-year contract in leaving the Bulls and Villanueva inked a $35 million, five-year deal as he bid farewell to the Bucks. But there’s only one problem…the Pistons have been as lucky as Tiger Woods (as of late) in selecting the cream of the crop that June has to offer in this decade.

Ed Davis from the University of North Carolina.

Lacking consistency in the frontcourt, the Pistons need a “true” big man. The sexy picks would have been DeMarcus Cousins or Derrick Favors but they have to settle for what they can get. Currently, the franchise is led by Ben Wallace, Kwame Brown, Austin Daye, Jason Maxiell and Charlie Villanueva (if he counts). Swingmen and guards dominate their roster.

Davis has been described by ESPN’s Chad Ford as a player who has “a nose for the ball and attacks the offensive glass. But he’s also not the most polished player in the Draft.” Despite his weaknesses, he may be the perfect choice for the Pistons. At 6-11, 225 pounds, Davis may be able to add a bit of intimidation towards the opposition with his huge frame. Although his averages of 12.9 points 9.2 rebounds and 2.7 blocks per game weren’t the most impressive, he has tremendous room for growth. Under the tutelage of the Pistons, the sophomore from Richmond, VA could potentially bring back the “Bad” for the boys in the Motor City.

You be the judge…