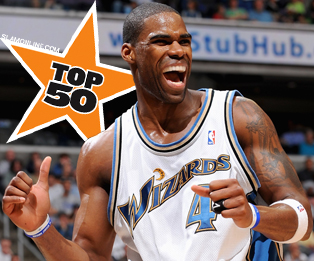 *Best friends* Vince and Antawn have long been inseparable, or so they say. When they balled together at the University of North Carolina, Antawn was the good one, the award-collecting leader that always seemed to be striving to reach his potential. (Note: A Billy Packer drool cup still sits next to the Wooden and Naismith awards in his trophy case.) Unlike good guy Antawn, Vince was

seen somewhat as the bad boy that didn’t appear to be doing everything he could to dominate.

When the two scorers were traded for each other on draft day ’98, it appeared that Golden State was getting the angel with the white smile that glistened – his game light and easily enjoyed without stress like a watery American beer – and Toronto was getting the unfulfilled potential, dark and rich with hops like a Chimay rouge; the raw skills one might sell their soul for. (Note: I think the need to use a beer analogy to liven up a discussion of Antawn Jamison only serves to reinforce how easy it is to overlook him.)

When the dynamic duo began their divergent NBA odysseys, it was Antawn who was barely noticed, but still ‘a nice player’ on some forgettable Golden State teams. (Riddle: If a guy averages 25 a game in Golden State in 2001, does the national media make a sound? Answer: No.) While Antawn toiled in relative obscurity, Vince blew up, aviation-loving fans and media alike swinging from his jock. Because really, what’s some inside/out, incredibly solid earth shit when you can kiss the rim? So Antawn went about his November-April business and Vince leaped tall buildings in his signature kicks in May, earning acclaim, adulation and even some short-lived next-Jordan talk .

As Vince was beginning to be seen as a malcontent for not reaching that potential in Toronto, Antawn was traded to Dallas and won the sixth man of the year award, admirably sacrificing himself for the greater good, though any true shine he could have received was dulled by a playoff exit at the hands of the Kings. He began his tenure in DC the following season and has been plying his trade in the nation’s capital ever since.

Jamison has continued to be a pillar of consistent offensive productivity for the Wizards. Tawn’s probably the only guy that you forget averaged a double double last season. Despite all that he’s given, Jamison continues to be overshadowed (contract size, media attention, etc) by a blogger that currently functions on one knee and a blossoming two way stud with a penchant for straw-munching.

During Tawn’s steady, overlooked time in DC thus far, Vince’s rep has grown and shrunk like a highly traded stock.

Maybe it’s about time we just let the controversial whipping boy do his thing in relative anonymity and focus some prolonged attention, full Wizards squad or not, on the nice guy. A little role reversal never hurt anybody.