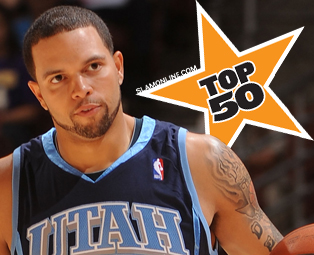 Somewhere, sometime, something happened to Deron Williams. Something that can only be defined by the look in his eyes.

We’re excellent at reading expressions. We can look at someone’s eyes and learn more than any words can attempt to explain. Try it yourself sometime. Take an old family photo and cover each person’s face but their eyes. The people who are truly happy stand-out clear as day. Now check a couple pictures of Deron Williams in the past four or

five years. Cover everything but his eyes. See the absolute assuredness. And read on.

Whether it’s on the court or elsewhere, Deron Williams has a twinkle of confidence, and he’s had it for some time. It’s a swagger, a humbleness and a confidence wrapped into a single gaze. This look hasn’t wavered for years, and it almost scares me how constant it’s been. Deron’s drive and focus will not leave until his plan is complete. The fact that his confidence is so pure makes doubting him impossible.

Deron’s had this plan for a while, and he follows it to a tee. This is why he’s confident in his every move on the court. It’s why a fragile change of direction will send almost every defender off-balance (and often to the floor). This is why teammates and opponents immediately respect him as a leader. He has a plan, and he’s confident about executing it.

Remember, Deron Williams never was supposed to make it. He barely showed up on high school recruiting charts (49th in the Class of 2002). He wasn’t a McDonald’s All-American. Texas, the big hoops powerhouse in his home state, wasn’t interested in him. He was chubby, a bit too slow and a lot too normal to be anything but an average collegiate starter.

We may never know when it all clicked, but we do know what happened. His entire demeanor changed. He added a little strut to his stride. He would stare-down any opponent without a hint of fear. He began to believe he was better. He wasn’t faster. Not stronger. Surely not quicker. But better. He began believing he could make others better as well. Deron Williams learned what a true leader – in any walk of life – knows…somehow, some way.

And this is rare, you see. Extra rare. I’m not one to put stock in fate, but the majority of people either have it or they don’t. You’ve heard it before, and it’s true: some people walk into a room and go unnoticed, and others enter a room, demanding attention. Generally, this cannot be taught. What makes Deron Williams such an aberration is not only did he transform into that person who commands attention, but he intuited how to do it himself. He had no sensei; he had no teacher. It – whatever that indefinable it is – came to Deron at the very last possible moment in his basketball career. He knew right away what he could become and immediately created a plan to get there.

To give you a better picture of how profound this change was for Deron Williams, consider again his high school ranking. Scout had him at no. 56, Prep Stars had him at no. 54. For too many reasons, recruiting systems should not be taken as dogma, but their innate flaws prove a point. The rankings compare athletic gifts (which somehow extrapolates to potential?). Deron Williams ranked in the exact middle of the pack, and rightly so. His physical gifts didn’t change, but something else did.

Deron clearly found something. A light bulb came on, and the path illuminated immediately. He saw a way and began walking in that direction without one regret. Not one bit of fear. This confidence has not changed his skill set, per se. Yet, the confidence made him an infinitely better player. He puts the ball on the ground with a clear purpose. He shoots knowing it will go in every time. He defends like he can predict his opponent’s every move. He plays until the very end, understanding anything can happen when you believe. Deron figured something out, and it transformed him into a transcendent talent.

For the first time in his career, Deron Williams no longer looks round. As he lets his vision become more and more of who he is, I suspect Deron’s physique will continue to change. What Deron sees for himself will no longer just be in his eyes. His exterior will match that of his mental philosophy – an elite athlete. Clearly, Williams is transforming his body, but don’t think he didn’t know it would happen. That undying confidence is making him into the new point guard prototype only he envisioned.

He’s slowly painting a picture on an easel that’s facing away from you. He has the slightest hint of a smile, which makes you wonder what exactly he’s creating. All you can see is a faint reflection in his eyes. You wonder why he’s taking his time like this, barely moving his brush before altering the color ever so slightly on his pallet.

Of course, the painting could be the complete wreck. But something about the way he’s regarding his work – with so little struggle, so much vision – assures you. As much as you want to, you don’t need to see the picture yet because you worry even the slightest movement could ruin his concentration. Let the artist go to work. This is why he must be trusted to execute. This is why, In Deron Williams I trust.