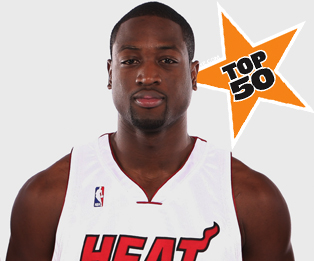 Dwyane Wade awakened with a start, nearly spilling a half-full red G2 all over his 3,700 thread-count Egyptian cotton sheets. Over on the nightstand, his Sidekick buzzed out the first few notes of an old

Mike Jones song. Odd, Wade thought. That’s not what it’s supposed to be. Wade suspected Daequan Cook was the one who kept changing his ringtones, but had never caught him at it. Without lifting his head from his triple phat goosedown pillows or even opening his eyes, he reached out his arm and brought the phone to his ear.

With that Wade sat up, capping the G2 and setting it next to his iHome. Rubbed the sleep out his eyes.

“Oh right, right—Dr. Bertschinger. Thanks for getting back to me so soon. Did you figure that stuff out for me?”

“Yes, Dwyane. I had my team look into it. We went through it again and again, and no matter how many time we crunched the numbers, we concluded that there is absolutely no way you can fall down seven times and get up eight. It simply isn’t possible. I’m sorry. And as a theoretical astrophysicist, I explored EVERY possibility. Trust me. Oh yeah—can I be in your five?”

Bertschinger was still talking, but Wade had stopped listening. Crestfallen, he let the phone fall aw…

Man, I’m sorry. There I go, just using Wade’s spot on this list to be all clever and look-at-me writery. My bad. Let me try this again.

The first time we wrote about Dwyane Wade in SLAM, we spelled his name wrong. It was an honest mistake. Truly. He was still at Marquette then—not anywhere near a household name obviously—and spellcheck doesn’t help when it comes to proper names and who the heck spelled Dwayne “Dwyane” anyway? Yet in a world littered with Anfernees and Andrays we should have known better and double-checked.

Now? It’s the traditional “Dwayne” that looks wrong. And if Mr. Wade keeps playing the way he’s been playing, 20 years from now guys named Dwayne are gonna be the ones getting their name spelled wrong. Because familiarity will go the other way. All becau…

Ah, that’s no good either. Personal reminiscence and still no real reasoning as to why he’s ahead of Player A or behind Player B. Maybe I should go to the numbers?

That’s how many games Dwyane Wade missed each of the past two seasons, thanks to an assortment of painful and surgically repaired reasons. It was all or nothing too—Wade averaged 37-plus minutes and 24-plus points per game in each of the 102 games he did play. Either Dwyane Wade played as Dwyane Wade, or he didn’t play at all. And in 2007 he averaged career highs in points (27.4) and assists (7.5) despite missing all of March and playing just five hobbled games in April.

That’s how many games the Miami Heat won last season. In the 51 games Wade played, the Heat went 10-41, including a stretch from late December to late February where they lost 24 of 25. Yeesh. His best game of the season—a 48-point, 11-assist, seven-rebound effort in an overtime loss to Orlando—came during that stretch. He played nearly 52 minutes. Other great games produced similar results. Back-to-back December nights of 36, 10 and six against the Hawks and 41, six and five against the Nets resulted in two more losses. His last game of the season came on March 8th. He played 39 minutes and stacked up 24 points and eight assists. The Heat lost, dropping their record to 11-50. I would have taken the rest of the season off, too.

That’s the most games Dwyane Wade has ever played in an NBA season. It was his second season, his 24.1/6.8/5.2 breakout year. The following season he kicked it up yet another notch with a Jordanesque 27.2/6.7/5.7 line and the championship that had people wondering whether he was actually the class of the Class of ’03. Then came the injuries and the sweep at the hands of the overachieving Bulls and 10-41 and LeBron’s hey-Mike-look-at-me digits and there went the neighborhood.

That’s the spot where we ranked Dwyane Wade. You probably don’t agree. His talent and career averages and Olympic performance place him higher, his injury history places him lower. His age—he turns an older-than-you-might-think 27 in January—places him right square in his prime.

So let’s see what happens next. Will he be able to resume his rugged game of controlled recklessness? Will his surgically repaired body hold up for >37 x 82? Will he mesh properly with a new coach and a new scorer and a new point guard? Will he bang and dunk and shoulder (NPI) his way right back into that LeBron/Kobe/CP3/TD/KG best-player-on-the-planet discussion?

I don’t know what the answers to those questions will be. He might come out of the gate on fire, energized by that gold, he might go down seven times and get up six. Either way, it’ll be fun to watch.