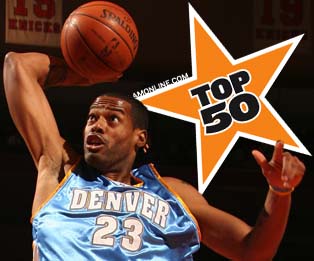 Marcus Camby has never played a full 82 in the NBA. When he does play, Camby can always find a way to change the game without having to score points. Because of his lengthy limbs and thin frame,

Camby can look awkward on the court at times. However, being successful in the NBA isn’t about looking good – it’s about getting the job done.

Camby is a tremendous presence in the post and even occasionally playing D out on the wing. He will defend the lane, rebound, block about three shots a game, tip-in anything around the cylinder and can even man up on your 2-guard, if you put one of Carmelo’s guns to his head. He’s one of the few players that, even at 6-10 or 6-11, was ready to play in the NBA before he had an NBA body. He was that good of a defender.

At UMass, a skin-and-bones Camby brought the Atlantic Ten Minutemen to the Final Four. He was the leader of one of the most exciting teams in college hoops. However, the trip to the dance was nullified when the NCAA found Camby accepted $28,000 from sports agents while he was in school. While Camby’s game has always been tight, off-court issues during the early part of his career overshadowed his playing prowess.

He got off to a good start after being taken 2nd in the 1996 draft by the Raptors. But it wasn’t until about his fifth season when he started steadily dropping double-doubles. He helped the New York Knicks to the NBA Finals in the amended 1999 season and was considered and anchor of the a fast paced Denver team, that often had Camby leading the break. And remember: this guy plays the five.

Camby is a tough dude but doesn’t feel compelled to act it out, like a Ron Artest or Charles Oakley, whom the Knicks traded to Toronto to acquire him. He is one of the only guys who doesn’t need to prove he’s tough. He just collects himself and plays hard. He doesn’t need to threaten to shoot someone in order to maintain his position.

He leads the league in blocked shots almost every year, is usually top-five in rebounding and, besides winning the award in 2006-07, Camby always finishes high in Defensive Player of the Year voting.

Even amongst an elite group of ballers like those in SLAMOnline‘s Top 50, Camby is one of less than two-dozen players who are capable of a triple double on any night. Camby doesn’t need to look good doing it, he just needs to get the job done.