So now what? Oh yeah, Kobetime. 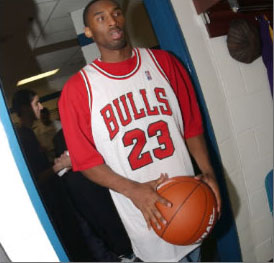 The Finals and playoffs are over, and as we look forward to the draft… oh no wait. KOBE has something to say…

Sigh… remember all that team and system stuff we’ve been forcefed (and forcefeeding) through the Spurs run to the championship? Well, this is not that. He should stay on the Lakers, because at this point KOBE is a plaything for our collective amusement. Do you want to see happy KOBE smiling and winning rings? Or do you want to see dark KOBE, frustrated and taking on the world one triple team at a time, lashing out at everything internally while keeping his repressed public image as guarded as he can? We already know that when Kobe plays on a good team, he can win multiple championships. Anyone can win it all playing for a good team. That’s what Tim Duncan just did. LeBron took a bad team to The Finals, where they fell flat on their face. Maybe KOBE can take that last step and prove he is the best ever (he thrives on such thoughts. I guess) by winning it all in spite of his team roster and management. Perhaps Phil should retire once more so that KOBE can be free from the past. Or he could just go along for the ride with Chicago or Phoenix. One thing is for sure, people like to talk and speculate about him.

By the way, the T-Wolves recently traded Mike James for Juwan Howard. I’m not saying Mike James is the greatest player, and on that team he’s below Randy Foye in the long-term future, but um, someone is going to have to explain this one. Back when Juwan Howard was the second best player on the Bullets, people would always compare his post moves to Kevin McHale. It’s possible that McHale took those words to heart and has decided the only way for the T-Wolves to win is for him to resurrect himself as a basketball player. You could say that it’s a good move to lose one of their 15 PGs in exchange for a big man, but whose fault is that they have all of those PGs? Kevin McHale. He is not a good general manager.

As for the summer, we’ve got the draft coming up. Lots of non-NBA stories coming in from a bunch of different people. My 10 day exodus to a secluded island (LOST?!?) where if I even see a computer or a cell phone I will punch who ever is using it right in the face. Lots of putting the interns to work on putting stories from the magazine on the site. We’ll come up with ideas. It’s hot out. I was at a street fair yesterday and the sun was trying to kill me.

Looking back on The Finals, I am glad they are over and it was a sweep. If you want to get all sportswritery, I could say that I predicted it. But hey, if you used that information as a basis to earn supplemental revenue, then I congratulate you, and it is you who are the real winner.

Two highlights from our trip to Cleveland: The Chris Sheridan Explosion and our Friday conversation with Stephen A. Smith.

Lang, an unnamed espn writer whose name I won’t mention just because I like to keep that element of mystery (like LOST???), and I, were sitting at a table in some horrible breakfast restaurant at the airport. Stephen A. approached the espn writer and they started talking. It was 7 A.M., so we didn’t get the full on energy we’ve all come to expect from the man, but he still went on a toned down tirade about incompetent GMs and stuff. It must be hard to turn the switch off. The highlight of the monologue was when he said “If Cleveland won last night and we had to go to game 5…” he looked longingly out the window to the distant horizon. He paused… dramatically. He finished his thought with a despondent tone “…I don’t know what I’d do.” GET THAT MAN OFF GENERAL HOSPITAL AND PUT HIM ON THE SHAKESPEREAN STAGE!!! I AM SCREAMING LIKE HE NORMALLY DOES AS AN HOMAGE!

Back to Sheridan. The only way to describe it is to say it was like the scene in Goodfellas where Joe Pesci shoots the busboy (played by Michael Imperioli!) in the foot, but more demeaning and hilarious. It was so good that I told my girlfriend about it, and she was appalled. That’s when you know something is funny.

Other than that, the media part of The Finals was a lot of meeting people whom I read but have never talked to in person. It was like being on a 3-day blind internet date, only without the NBC Dateline creepy sexual predator part.

Alright… so, KOBE! He’s crazy, right? Remember back when he won his third ring and people were speculating that he could be the new Bill Russell and all of this stuff? Well maybe winning too much too soon can drive you even further towards insanity. Very impressive. We are all waiting for the next development in this saga. Kobe and KG to some random third team in a 9-way trade, which will fill the roster with anyone that will play for the league minimum?