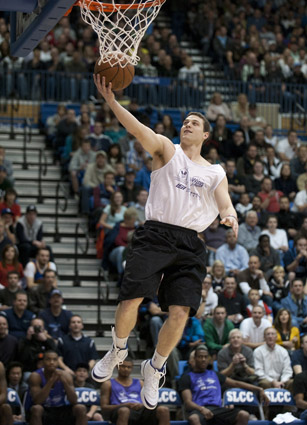 Avoid it if you must, but there’s no questioning social media’s transformational impact on how we experience basketball—as fans, media, players or coaches.

Before a game even tips off, fans have already checked-in on Foursquare, uploaded a picture of their seated vantage point to Facebook and perhaps tweeted about the ever-increasing price of concessions.

The media are sharing anecdotes and sound bites from their courtside perches, and receiving immediate feedback on their post-game stories. Fans can quickly share these recaps, advance the dialogue or Stumble it to websurfers with similar interests.

Immediately following the final post-game exchange with a reporter, players take to Twitter to thank fans, talk about their performance or provide a glimpse of access into their transient and often-envied lives via Tout or other video tools.

Coaches can diagram plays or describe, demonstrate and drill on YouTube. They can network on LinkedIn or share a motivational quote on Google+. They may even remind a player what time practice is the next day via Instant Messenger or the team’s Ning site.

The options are endless, the reasons are plentiful and the landscape is changing every day. No matter which way you shake it, social media is enhancing how we watch, analyze and interact with the game of basketball.

But don’t take it from us. We canvassed a cadre of bloggers, media, coaches and players to hear exactly how social media’s impacted their experience:

Anthony Davis, @AntDavis23, Freshman Forward at the University of Kentucky: “It connects me with a lot of different people; whether it be former teammates or guys who are in the League now—guys who are at the level where I’ve dreamed of being at.”

Chris Mack, @CoachChrisMack, Head Coach of Xavier University: “I try not to take it too seriously. It’s a lighthearted thing for me. If I find something funny, I’ll tweet it.  I try to let people see my personality.”

Tristan Thompson, @RealTristan13, Rookie Forward for the Cleveland Cavaliers: “I don’t have a Facebook, but Twitter is a good way to stay connected to the fans and show them we appreciate them—without them, we are nothing.”

Iman Shumpert, @_IAM_Iman, Rookie Guard for the New York Knicks: “Social media has enhanced my basketball experience tremendously this summer by giving fans and critics insight on what I’m doing to stay prepared when the lockout is over. Building my brand was my goal this summer and I feel that I have done so by being able to give video and blog updates on Facebook, Twitter, and now updates in the NY Post!”

Jimmer Fredette, @JimmerFredette, Rookie Guard for the Sacramento Kings: “It really hasn’t changed my basketball on the court but off the court it has been good for building my brand and getting in touch with all of the college basketball fans. They’ve been great and social media has just enhanced it all.”

Austin Rivers, @AustinRivers25, Freshman Guard at Duke University: “It’s allowed me to interact with the fans more, especially with them being able to ask me questions. I enjoy the back and forth with our supporters.”

Ashton Gibbs, @AshtonGibbs12, Senior Guard at Pittsburgh University: “Twitter is easy communication with the world. Being an athlete, it’s good to have news on the go because we’re always moving. I think twitter is good as long as it’s positive news.”

Andre Barrett, @DreDay3Gs, Point Guard for Roanne, France: “If I had it when I was younger I think I would have definitely enjoyed it. I did the SLAM diary for one summer and everybody loved it because they got to know me as a person—but you had to go and buy the magazine.”

Perry Jones, @PerryJones3, Forward at Baylor University: “Just being able to communicate with other people that play basketball. If I don’t have their number or anything, I can hit them up on Twitter…also, other players who play high school basketball, college, and NBA—it has enhanced it and i can see how other people view basketball.”

Ramon Moore, @MoneMoore, Senior Guard at Temple University: “It helps you interact with your fans, friends, family and connects you to different people. Following professional athletes, you learn about the right things to say and if a fan says something you don’t agree then you carry yourself in mature way.”

Andre Dawkins, @dre_day20, Junior Guard at Duke University: “It helps us to interact with the fans. A lot of the fans follow us on Twitter, and they get a look into our lives and know what we do on a daily basis so they get a better appreciation for what we do.”

Sean Kilpatrick, @SK23_ESPN, Red-shirt Sophomore Guard at University of Cincinnati: “When you watch me on TV, that’s just the regular Sean you see—the basketball Sean. Not everyone gets to know the other side of Sean, so that’s the reason why I have it.”

Seth Curry, @sdotcurry, Junior Guard at Duke University: “The biggest thing social media has done is let me connect with the fans on a daily basis. They get to see what we’re like off the court, our sense of humor, and it’s a better way for us to interact with them.”

Durand Scott, @DScott_1, Junior Combo Guard at the University of Miami: “A lot. Twitter users are the ones who publicize me and it gives people who haven’t watched my games a glimpse of what I’m doing. I guess without them there wouldn’t be as much publicity as you would like there to be.”

Tyler Harris, @TylerHarris34, Freshman SG/SF at NC State: “Social media has given me the chance to learn about other players in the basketball world and for them to learn about at me. It’s always good to know who you are competing against.”

Ben Osborne, @Bosborne17, Editor-in-Chief of SLAM Magazine (@SLAMOnline): “Personally, Twitter has made it possible to feel like I’m watching a big game with friends even if I’m alone at a bar or at home. And business-wise, it has been an incredible tool for SLAM to reach our readers with links, contests, etc.”

Bomani Jones, @Bomani_Jones, BomaniJones.com: “The thing is that most of us are stuck at our houses watching basketball games. With Twitter, all of a sudden it puts you inside of a bar—except you can hear yourself think.”

Andy Glockner, @AndyGlockner, Writer for SI.com: “I think the biggest thing is if you cultivate a smart group of followers, you realize their collective wisdom is unbelievable. Whenever I watch a game, there’s not a play or scenario that can’t be discussed, debated and analyzed in amazing fashion. You always end up with clarification or an answer you didn’t know or better perspective as a fan and as a writer.”

Ian Begley, @IanBegley, Sportswriter for @ESPNNewYork: “Great to follow some of the top basketball writers in the country on twitter and get a sampling of their viewpoints in real time.”

Nate Jones, @JonesOnTheNBA, Digital Marketing and Pro Athlete Marketing @GoodwinSports: “Social media has enhanced my basketball experience by bringing smart fans from all over the globe together to comment on hoops real-time.”


Tas Melas, @TasMelas, The Score/The Basketball Jones: “Only medium that can make a Bobcats-Raptors Blowout bearable. Jokes. Insights. Brilliant ideas from both the famous and just plain old fans.”

Chad Babel, @ChadBabel, Director @TheHoopGroup: “The biggest thing that social media has done has been to decentralize peoples opinions. You know what people are thinking right when they tweet it, which makes their opinion more genuine and gives you a look into their thought process.”

Jeff Borzello, @JeffBorzello, Writer for CBSSports.com: “First, prob wouldn’t have my job w/o it. My news comes from it, I’ve met BBall people and it’s a great audience. Plus, I’m verified, so…”

Matt Norlander, @MattNorlander, Writer for CBSSports.com: “The entire process of watching—or, sometimes in my case, attending—games has been drastically altered because of Twitter. You get widespread, immediate reaction, and Twitter’s the absolute best during big games. I’ve heard someone say Twitter’s the best sports bar ever, and it really is. There’s this communal, instant reaction, and it’s great.”

Jonathan Givony, @DraftExpress, Founder/Owner of DraftExpress.com: “It’s fun. I think a lot of times when your watching a game—the NCAA Tournament, the NBA Playoffs, or whatever it may be—it’s a lot more entertaining to see what people have to say on Twitter instead of listening to the broadcasters on TV.”

Jeremy Bauman is the associate community manager for fivestarbasketball.com, an IU Alum and basketball aficionado who blogs about everything basketball at SLAMonline.com. If you have any inquiry at all, he can be reached by email at jsbauman13@gmail.com.