Speaking of Injuries: T-Mac Uncertain for Start of the Season 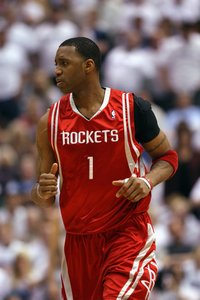 T-Mac’s tone hasn’t changed since the start of the preseason. He’s still talking about those nagging injuries. And now with the season opener just around the corner, McGrady doesn’t sound as though he’ll be ready to go when the lights come on for real.

What’s most important is to be healthy toward the end of the season,” McGrady said after Saturday’s workout. “If I’m not ready to go in the first couple of games, then that’s just the way it is.”

“This is something you can’t rush. I would like to be out there with my team come the 29th. But, you know, if things don’t go right, then I can’t be out there.”

Of course, Tracy is right. Better to rest up now and fully recover from offseason knee and shoulder surgeries.

Rockets fans can only hope the fact that their superstar barely saw the floor during the preseason, isn’t an indicator of things to come the rest of the way.