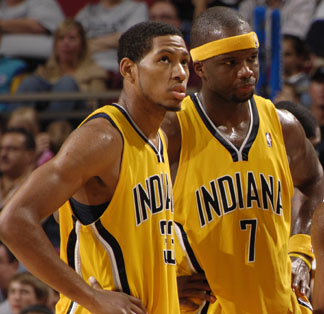 The Pacers have had by their standards a very disappointing season and finish at 36-46–winning 11 of their last 16. They’ve suffered injuries that have crippled their NBA reputation just as much as it would have any other team and lost CEO and team President Donnie Walsh to the Knicks, but remain upbeat. Although Jamaal Tinsley finished the season on the injured list, Jermaine O’Neal returned in attempts to help his team make that final push into the playoffs. It didn’t happen, but there is cause for optimism. Mike Dunleavy Jr. averaged 19 in his stead and Danny Granger is heating up in his third year out of New Mexico–averaging 34 points and almost 9 rebounds on 51% shooting the last 4 games–to also average 19. I try to pick up on how genuine players have been this year and the O’Neal and Granger are definitely two who have a sense of fire in their eyes…

The NBA better watch out next season or collectively it will get ran over by a team determined and focused on the get back.

MT: J.O. What’s it like to finally get out there and play?

Jermaine O’Neal: It’s been a long time man. It’s been a few years since my knee has been healthy. I tore my meniscus last year and I told the staff not to tell anybody because I knew there was going to be a lot of talk about it. I ended up having surgery last summer and it didn’t go as well as we had hoped in rehab, but it was effective because it made me work harder.  Now, my knee is healed. It’s the best my knee has felt in two years. It’s all about getting my cardio and my rhythm back, trying to be effective and learning how to punish guys all over again in the low post.

MT: It had to be mad frustrating sitting out and watching the game from the bench. What did you learn the most from being on the sidelines? Was there another aspect of the game you picked up during this time?

JO: Oooh yes, the mental part. They biggest thing I’ve learned over the two and half months is that I’m getting older. I’m not the 17 or 18 year old that I used to be where I could come in and do things and get away with it. I’ve always thought over the last couple of years that no matter what was wrong I could always outplay the guy who is playing in front of me. Now that I’m getting older, my body is starting to talk to me a little bit differently. I feel like I’m going into my prime. I have an knowledge and understanding of how I’m supposed to approach the game and it’s something I had to really learn. It’s kind of a culture shock for me because I had to see my team struggle. That hasn’t happened for a long time and it was difficult sitting for so long.

Now I know what I have to do. I’m taking it all back to the drawing stage. I’ve put together a great staff that’s gonna put my honor all back together. I’m not far from it. The knee is just about 100% strength. The healing part is already done. I’m really exciting and very much looking forward to getting back on the court next year.

MT: What message would you like to give to NBA fans? If you look at the league right now, no one is really thinking about Jermaine O’Neal because you’ve been out even though you have All NBA talent.

JO: I would tell them that I appreciate the support. I still get a lot of support in every arena in the NBA. (Looks me dead in the eyes. I saw the warrior in him) Come next year…they are gonna get what they are used to seeing. This is going to be the first summer in a while that I’m not going to have to rehab for two months. I’m going into the summer totally healthy, so I’ll get an opportunity from day one. I missed 2 and a half months. I’m not taking time off at all. I’m taking a week and a half off after the season is over and I’m getting right back at it. Look for me to return to my dominant form next year. I was able to make the all star team the last couple of years and the knee wasn’t 100%. Now I know what I need to do. It’s not about being athletic and it’s not about having talent. It’s about thinking the game. Now I understand the game a lot more now. I haven’t slowed down a step. I’ve picked it back up. It’s important to me to get it all back.

Check me out next year (winks) you’ll see.

MT: Do not take this wrong because I’m not saying at all that the game has passed you by. That’s obvious, but have you learned to appreciate the game more as a professional? Different that my earlier question..but did you see the game through unique eyes?

JO: Definitely. I appreciate the question. You’re pretty good. I look it as…when you get to your 11th or 12th year, you have to rethink because sometimes things go so well for so long that you kind of disrespect the game. You are just doing enough to be good–All NBA or whatever–and do what it takes to help your team, but to come in and really dominate. I wasn’t doing that and was just doing All NBA stuff. I played on injuries that I shouldn’t have played on despite what the doctor said. We have so much talent in the league man that you have to understand that guys are getting quicker, jumping higher and shooting the ball better.

If you don’t understand that then you are going to be pushed to the side. I understand that now. That 2 and a half month layoff really helped me get it because I was strictly watching. I would think to myself that these guys are good. These guys are doing it, so I know what I have to do. During that time out, I’m jotting down names and making phones calls to my people to get this done. I told them we have to find a trainer, a medical staff, a skills guy–everything.

I found one of the best skills guys–Jerry Powell out of New York–to help me with my game. It’s not about proving anything to anybody but proving to myself that I can get back. I will get back. I have no doubt in my mind.

If there is anybody out there who doubts that..then they are gonna get the NBA package.

MT: I spoke to Ron Artest and I could genuinely tell that he misses playing with you, Jeff Foster Stephen Jackson and Jamaal Tinsley. He told me he messed up there by walking away from the team because he wanted to finish his career playing with you. What’s your response to that?

JO: First and foremost, Ron’s a tough cover. He can post it up, shoot the three and put the ball on the floor. He’s like a 4 playing the wing position.

I’ve never held it against him. We had great teams (stares off). Honest to God I wish we won a championship together. I respect him as a man because no matter what I saw him away from the basketball court. You see it Mike, but most haven’t and don’t. I saw him with his kids. I know what type of father he is. I respect it because I have kids.

I thought we had a core that could have won for many many years, but things happen. I wish him the best of luck. I know he’s having a tough time out in Sac right now. Just reading some of his comments as of late I think he’s…sometimes we have to have things happen in our lives to understand what we need to do to approach life. The key thing is learning from our mistakes, make adjustments and keep it moving forward.

MT: What’s been going on with you? You seem to be breaking everybody down and have become an all star caliber player.

Danny Granger: Right (Travis Diener jokingly cuts in “It’s because I’ve been passing him the ball”). I’ve just been trying to develop my game and take guys off the dribble. Because I shoot it so well, guys are playing me tighter so I have to go to the basket more to keep them honest. I’m also working on my ball handling so maybe in fact I will become an all star.

DG: Coming out of college–I didn’t go to a big school–they thought I was undersized. I had a chip on my shoulder the entire time. I thought if I played good at New Mexico, I could be a top five pick. I always thought I was a talented player even though no one else thought so.

MT: What is the reason why you are blossoming into such a talented player on this level? Is it your will, basketball IQ or your athleticism?

DG: I think it’s a combination. I use the stuff I know I can do well and try not to do too much of what I can’t. I’m a good shooter and good off the dribble. I’m not a point guard..throwing passes behind my back. I can create for my teammates, but my main thing is to score the ball. I want to really get good at that and playing defense also. I like playing defense and strive to be the best.

MT: What’s it gonna take for this team to get back to your associated level? J.O. seems to be coming along strong. What’s the future hold for the Pacers?

MT: This was a tough game for Philly in terms of execution but something has to be said for your defensive intensity.

DG: Right. We’ve been playing well. Hopefully J.O. will be back with us, because look out for good things from us next year. We have a good foundation here. I’m young and we have a lot of young players so…

MT: Besides the championship obviously, what’s your NBA goal?

DG: Individually, I want to be remembered. I want to reach that all star level and play in the all star game 3, 4, 5 years in a row. I want a championship more than anything. There’s no greater feeling.

MT: Whose that person that made you initially say I want to be that all star?

DG: My father. He loved basketball. He was always working with me. He told me if I continue to get overlooked then I have to work harder. I worked on my game. I was always a late bloomer because I wasn’t so good in high school and became really good in college. I’m finally coming into my own.

MT: Do you want to be the Most Improved Player? What would you tell the voters right now if you could say anything to get that trophy?

DG: My number one commitment is to the team. I’ll never lose sight of that. As far as the MIP, look at my numbers. They’ve gotten better across the board in every category. It would be a great award to win, but if I don’t it’ll just be another motivational tool.