State of the NBA:Reasonable Doubt? 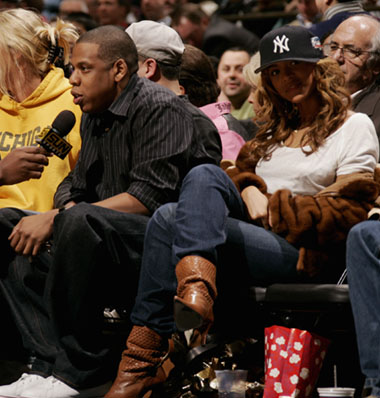 Myles Brown a.k.a. The Artist Formerly Known as Max Airington is our newest featured columnist on slamonline, and for his debut he chose to explore today’s NBA using lines and themes from the classic Jay-Z album Reasonable Doubt. Without further ado, this is day one of the new column Bears Come Up to this Window.

Can’t Knock the Hustle– He’s been making short term goals since we saw The Palace explode. Made his players put away the leathers and the ice and the gold. Enough rule changes to make Nash a big willie, but now the league has got more at stake than Philly… David Stern has been aware of the prevailing perception of the NBA for quite some time. Being in the business of basketball, he’s responsible for leaning on anything that intervenes with the sound of his money machine. However, adjustments to the game and its culture in an effort to recruit the casual fan along with corporate Amercia have offended some diehards and rendered the sport unrecognizable to others. So as the lig continues to combat its ‘thuggish’ image and meandering ratings in search of its next Jordan, many fans of yesteryear are wondering what happened to the league Jordan played in. The Tim Donaghy fiasco has given the NBA an opportunity to redefine itself, but that can only happen through improvements to the actual product rather than its packaging. We can only hope they’ve learned. Defenders live on the floor like worms and travelling’s spread like germs. Now we’ve got extensive pros in expensive clothes, ridiculously petty fines and not enough vintage scores.

Politics As Usual–With all the dough they paid? Gotta get sh*t appraised. No disrespect to dude, but who says his word is true? If refs are changing major wagers down in Vegas, they can make Duncan have a night off. Suites cost big money, but they’re tax write-offs. A lot of fans don’t see that much money in their life. When it comes to their cheese they hold on real tight…Stern’s hour of “Meet the Press” last month was probably the most uncomfortable of his tenure. The commissioner spent a significant portion of his appearance detailing the components of league security and their exhaustive supervision of referees. Despite a limited disclosure of information and a bureau investigation which has yet to be concluded, Stern was certain that just one ref had brought this grief to be. He was also quick to remind the public that such “rogue employees” are hardly limited to the NBA and have existed within many of our governmental factions. Which is true, but this was after he proudly proclaimed that members of those same organizations also comprised his security team. Besides, the crooked government official is a time tested cliche. It surprises no one. It’s simply another one of life’s abject disappointments. Which is why people demand integrity of their sports. Sports are supposed to be the one place where hard work is always rewarded, fair play is to be expected and there are definitive winners and losers who’ve earned their labels. To compromise that vision is to deny viewers the emotion that accompanies it, which is the very lifeblood of sport. Stern is more than aware of this, and was intent on isolating Donaghy to shield the league’s integrity from the skepticism of the buying public. But with no end to this scandal in sight, it’s going to be difficult.

Interstate 95’s Finest –You crazy? You think a few little trades can change things? Hardly, they’re Varsity. The East is JV…The Celtics acquisition of Kevin Garnett and the possible resurgence of the Eastern Conference has been a pleasant distraction from the past month’s crisis. Many of the NBA’s marquee matchups are played when most of the country is asleep. Seven of the last nine champions are from the West, the conference boasts six of the last eight MVPs, and Oden & Durant joining the fray will only improve what was already enjoyable basketball. On the contrilly, the Eastern Conference is nothing short of perfected mediocrity. Although there are several talented players out East, they’re mostly swingmen whose productivity can be as streaky as their jumpers. The paucity of post players assures half of the teams home court advantage simply for having an effective center and essentially renders the rest of them roadkill. Zach Randolph and Jamaal Magloire’s defections from the left coast provide support to their respective squads developing big men, but more importantly they help restore a nationwide balance of power that the league hasn’t enjoyed in years. The West, Pacific Northwest, Rocky Mountain Region, Southwest, Midwest and Southeast all possess multiple noteworthy teams. This has contributed to the renewal of long standing rivalries and declaration of new ones. But the resurrection of basketball’s bible belt is crucial to the league’s popularity. Boston and the New York tri-state area have always been home to some of the NBA’s premier talent and were playoff stalwarts. Their inability to field competitive teams over the past decade has not only diminished the exposure of the games largest TV markets, but also the quality of its prime time programming. Until now. KG, Ray & Paul?! Sh*t your draws!

Dead Presidents–I forgive they weak ass, hustlin just ‘aint them. Aside from the fast cars and honeys that shake they ass in bars, you know they wouldn’t be involved with the 5 AM weightlifting and lumbar disc slips. West Coast homestands, East Coast road trips…Kevin Garnett and the Timberwolves parted ways because of the franchise’s inability to surround their star with complimentary talent. However, Garnett’s exorbitant salary was as detrimental to Minnesota’s title contention as managment’s ineptitude. Don’t get it twisted, KG didn’t just shine, he illuminated the whole show. You feel me? But his contract remained an obstacle. By 1997, Michael Jordan had established that a singular talent could produce revenue and championships. That same year Garnett led the Wolves to their first playoff berth in franchise history and the future looked promising. His innate charm and skills pegged him as a legitimate successor to Jordan and during that summer’s contract negotiations he made it clear that he wanted to get paid like the man. Much to managments surprise, Da Kid scoffed at a six year, $103.5 million offer and threatened to leave before signing a record breaking six year, $125 million agreement. That deal, widely believed to be the root of the 1999 NBA lockout, produced significant changes in the league’s collective bargaining agreement, but the precedent was set and a new market had developed. Relatively mediocre players were making more money in one contract than the previous generation did in their entire careers. Free agency is obviously a necessary process, but it’s become a Rubik’s Cube of timing, cap space, deep pockets, available talent and team chemistry that has been diffcult for many franchises to solve. The high stakes competitve market is more beneficiary to the individual than their respective team. With guaranteed contracts there’s no risk involved for a player merely out for presidents to represent him. But mistakes are much costlier to management since an expensive player who underperforms limits a team’s options and could ultimately cost a GM his job. It’s nearly impossible to duplicate the championship Laker and Celtic teams because they played for peanuts. Any team that deep in the modern era is normally torn apart by greed. Few players are willing to sacrifice for the good of the franchise. Garnett has apparently learned from his situation in Minnesota and took a noticeable pay cut in restructuring his contract with Boston in order to improve their roster. Then there’s Rashard Lewis, who apparently is worth $110 million. Good luck with that Orlando.

Feelin’ It–They keeps it realer than most, but are you feelin’ it?…The controversial Barry Bonds is now baseballs all time home run leader. The flamboyant Rickey Henderson is MLB’s greatest base stealer. Tony Gwynn is one of the game’s greatest hitters and Derek Jeter is captain of the league’s preeminent franchise. Several pioneers of America’s pasttime were people of color and many of its current headliners remain the same. But baseball has never been viewed as a ‘black’ or ‘brown’ sport. Despite their prevalence amongst NFL rosters, football hasn’t ever been viewed as a primarily ‘black’ sport either, just another ‘All American’ game. The NFL’s well chronicled history of players running afoul of the law was seen as a problem, but until Michael Vick, that problem hadn’t taken on such a serious racial dynamic. Even the notion of a black quarterback doesn’t raise as many eyebrows as it once did. However, the NBA has suffered under the onus of being not only black, but ‘too black’ for decades. The problem subsided during the late 80’s through the 90’s when fans and media alike were enthralled with the high level of play. But as the stars of that era faded away, there was a resurgence of talk about just how dark the league’s landscape actually was. Just as in football, much of the league’s workforce is of an ‘urban’ background, yet for some reason it doesn’t translate the same. It has to be about more than helmets, right? We rarely bemoan the state of the NFL. Its players are seen as more than athletes, they’re modern day gladiators. But those gladiators have little room for error. Any player on an NFL roster can be dropped in an instant. The average career is much shorter and with only partially guaranteed contracts, their paper isn’t nearly as long as an NBA star. Or an NBA bench player for that matter. Maybe that’s it. Not the tatts or the braids, but the idea that these guys make too much money and they don’t even seem to earn it. Just as the “posse/entourage” once was, the concept of “stealing money” is held almost exclusively to the NBA and its players are roundly characterized as listless mercenaries. But many of them don’t seem to mind, because if they’ve learned one thing through the ‘amateur’ ranks of high school, AAU, and NCAA basketball it’s this: “If y’all n*ggas ‘aint talkin bout large money, what’s the point?”