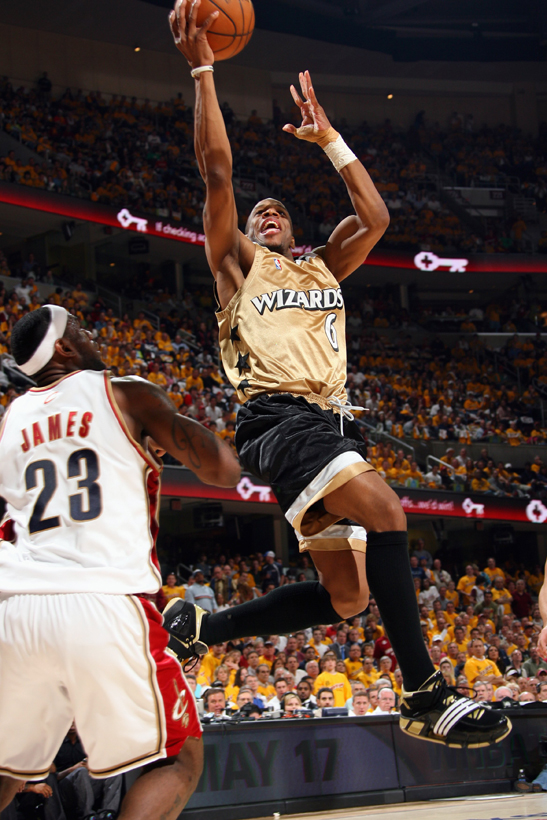 Through 10 years in the League, Wizards point guard Antonio Daniels has had a productive, if low profile career. A threat at both guard positions, Daniels’ various skills served several successful teams. He’s earned his money doing the little things that win games.

Daniels was taken by the then Vancouver Grizzlies with the 4th pick in the 1997 Draft. He won a chip in 1999 with the Spurs and has been a steady decision maker for the Wizards since coming to D.C. in 2005. Last season, he finished 5th in the League in the Assists-per-turnover category.

This year Daniels returns to a starting role in Washington where the Wizards have made four straight playoff appearances. With Gilbert Arenas and several other veterans out of action, Daniels leadership role will be increased. SLAM spoke with Daniels about seasons past and present.

SLAM: You’re starting right now, is that the role you’re most comfortable in?
Antonio Daniels: It all depends on the circumstances. Right now, I’m comfortable in that position because I did it all of last year. I’ve made a living in this league coming off the bench and changing the basketball game with the different hustle plays or dunks or whatever it may be. Part of being a professional basketball athlete is adjusting. You’re always adjusting to different time zones, gyms or different players and you have to adjust to a different role and I’m very comfortable in that situation because I feel like my coaching staff and my teammates have confidence in me.

SLAM: You’re sometimes labeled a combo guard, what do you feel is your natural position is?
AD: I’m a pure point guard. There ain’t no “if, ands or buts about it.” I’ve been called a combo guard, I have the ability to guard both positions, but my mentality is that I’ve played point guard my whole life. I’m definitely a pass first guard. I get more enjoyment out of assists than I do out of scoring. I have a point guard’s mentality. I don’t have a shooting guard’s mentality.

SLAM: Was there one guy you looked up to or molded your game after growing up?
AD: I loved Isiah Thomas. I had shirts that had “Zeke” ironed on them. I loved Isiah.

SLAM: Is there a secret to staying in the league as long as you have?
AD: I tell people all the time, “It’s difficult to get here, but it’s harder to stay.” I believe that you have to find something that you’re good at and continue to develop that along with the other little aspects of your game. Like if you’re a shooter, there’s always a shooter that’s needed on a team somewhere- but what else can you do? You have to continue to work hard and never take things for granted. It can be taken away in a heartbeat.

SLAM: In your mind, what was your best season in the NBA?
AD: Probably my final year in Seattle. We won 52 games and we made it to the second round of the playoffs and lost to San Antonio. I’ve had a lot of good memories. I just got armbands made that say “Truly Blessed,” because I sincerely believe that. In 2005, we lost in the Western Conference Semifinals, but Tim Duncan is still one of my good friends. He and Malik Rose both stood in the bridal party at my wedding. Playing against them in the conference finals was a great memory too.

I played in Seattle for two years. Their fans are great. I loved that city. That was a magical year for us in 2005. That year, Nate McMillan was supposed to get fired and we were supposed to come in last in our division. There were so many obstacles as far as why we weren’t supposed to succeed and then Nate goes out and wins coach of the year. We won 52 games. It was an amazing year.

SLAM: You won a championship with the Spurs in 1999; do you ever talk to the young players on the Wizards about what it takes to get there?
AD: I do and I don’t just talk about it. It’s something that I use to “lead.” You can’t teach experience. That’s something that guys have to learn on their own, but I feel like if they see it that it’s easier for them to do. Like, we practice at 11 and I am there every morning at 9:30 lifting weights and working out and so on. I heard a saying a long time ago that says “attitude reflects leadership” and it’s true. A lot of guys can talk about it, but it shows a little bit more when you actually do it.

SLAM: Talk a bit about your dunk over Andrei Kirilenko back when you were with the Blazers.
AD: I don’t really remember how it all happened. I believe it was a long rebound, I caught it and quickly threw an outlet pass to Jeff McInnis and he threw it right back to me. Basically, I knew Andrei Kirilenko is a shot blocker. I know that’s what he does. When it’s a guy like that you either go to dunk it or you don’t go at all. That being the most frustrating year of my career, it was an aggression dunk honestly. There were a lot of things going on throughout the year and so fourth–my role on that team–just a

I remember when I was in San Antonio I dunked over Keith Closs–who is like 7-4 or something. I don’t really think about dunking anymore. I honestly think about the Kirilenko one because I dunked with two hands. I had always dunked with one hand, and he kind of forced me to dunk with two that night.

SLAM: Aside from the money, what has been the best thing you got out of playing in the NBA?
AD: That’s a tough question to answer. Number one, it’s always been a dream of mine to compete in the NBA, the highest level possible. There are the great relationships that I have developed throughout my time in the League, on this team and different teams. The experiences have lasted a lifetime for me. The fact that my daughter is at an age now where she recognizes who I am and what I do. The fact that she looks forward to going to my basketball games and cheering for me is the biggest reward to me–more than anything else.

SLAM: Is there a big plan for you for after basketball?
AD: I would either want to coach or do commentary. I did a couple of coaching internships this summer and I loved it. I enjoy the teaching aspect and I always enjoy talking about the game as far as watching it and discussing it. I still play pick-up in the summer time. It’s a great way to stay in shape. I don’t go all out, but I still enjoy playing in the offseason too.

SLAM: It looked as if you got some more tattoo work done in the offseason. What did you get?
AD: It’s just tribal. It’s an extension of my other tattoo of my brother’s birthday and the day he passed, his initials. I just got this tribal design to go around it.

SLAM: What’s the short-term outlook for the Wizards. How do you feel the squad will do while you’re waiting to get everyone healthy?
AD: Until we’re healthy our job is to continue to win basketball games. I’m not a prediction guy. Even if we were healthy I wouldn’t give a prediction. I believe in everybody in that locker room and I feel like we can accomplish a lot.