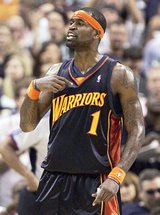 The situation in Oakland continues to deteriorate, and the outlook is not very good for Stephen Jackson and the team.

Yesterday, a defiant Jackson announced that he gave up his captaincy of the team after two seasons of wearing the proverbial ‘C’. Jack then added that he doesn’t want the young players on his squad to follow his lead. Probably a wise idea.

The Mercury News has more:

Q: Why don’t you want to be a captain any more. JACKSON: Because I don’t want these young guys to try to follow me. I’m not a role model. I can’t be a role model to guys that make the same amount of money as me, you know what I mean?

Q: Can you not be Capt Jack on this team? JACKSON: I mean, being a captain was overrated to me, anyway. You didn’t do anything but go at the beginning to talk to the refs, and I didn’t want to do that. Being a captain is overrated.

Though he was careful not to voice his desire to be traded again, Jackson did say that he’d be willing to consider a buyout from the team (a highly unlikely scenario.) This is going to get a lot worse before it gets any better.