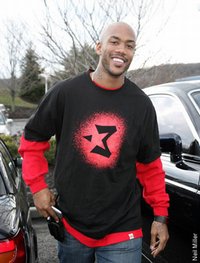 To the surprise of no one, the highly-anticipated meeting between top Knicks brass and point guard Stephon Marbury solved absolutely, positively nothing.

After showing up half an hour late, Marbury reportedly stormed out after only 15 minutes, figuratively ending his surreal five-year career in New York.

Here’s the official statement from the Knicks:

“After meeting with Stephon and his representative this afternoon, we have directed Stephon not to participate in practice or attend games until further notice,” Donnie Walsh said. “We want to continue to meet with him to discuss a long-term resolution.”

I’m not really sure what Donnie expects to accomplish by continuing to “negotiate” with Marbury over the long-haul; Stephon has made it exceedingly clear that he’s not willing to take a pay cut (his offer to give back a million dollars is now “off the table”), and the longer this goes on, the more foolish everyone involved looks.

As for the rest of the Knicks, they’re doing their best to pretend this whole thing isn’t happening, and are trying to focus on the task of playing basketball.