Stephon Marbury Would Like a Decision Sooner Rather Than Later 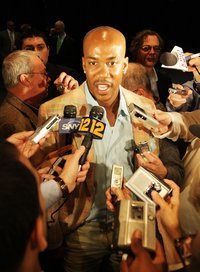 With Knicks training camp kicking off early next week, Stephon Marbury would like to know where he really stands with the team. He’s welcome to camp, this he knows, but he also wants assurances that he’s not being kept around in the hopes that he can be used as a negotiating tool for the team.

“It can’t be about the money. If you feel you’re better without me, just let me go. If not, let’s get down to the business of playing basketball. We shouldn’t be talking about me getting waived or not. We should be talking about bringing playoff life back to the Garden like when I got here (in 2004-2005).”

“We need to concentrate on how we’re going to win, not whether I’m getting waived or if I’m getting all my money,” Marbury said.

See! He doesn’t want to be a distraction to his teammates! And people have the gall to call him selfish and self-absorbed. Sigh …

By the way, Mike D’Antoni, should Starbury still be on the team by the time the season gets under way, don’t even think about inserting Chris Duhon into the starting lineup: “I’m not coming off the bench here in New York,” Marbury said.