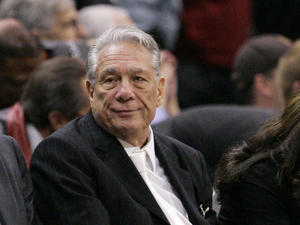 A visibly emotional Adam Silver announced Tuesday afternoon that LA Clippers owner Donald Sterling has been banned for life by the NBA.

The Commissioner said he’ll push the other 29 team owners to force Sterling to sell the Clippers. The process to find a new owner for the Clips, according to Silver, will begin immediately.

Commissioner Silver has also fined Mr. Sterling $2.5 million, the maximum amount allowed under the NBA Constitution. The fine money will be donated to organizations dedicated to anti-discrimination and tolerance efforts that will be jointly selected by the NBA and the Players Association.

As part of the lifetime ban, Mr. Sterling may not attend any NBA games or practices, be present at any Clippers office or facility, or participate in any business or player personnel decisions involving the team. He will also be barred from attending NBA Board of Governors meetings and participating in any other league activity.

Commissioner Silver also announced that he will urge the Board of Governors to exercise its authority to force a sale of the team.

The discipline issued today is based on the Commissioner’s conclusion that Mr. Sterling violated league rules through his expressions of offensive and hurtful views, the impact of which has been widely felt throughout the league.

Donald Sterling has, for decades, basically gotten away with bigotry and discriminatory business practices.

Adam Silver ensured that, at long last, Sterling’s shameful reign as the owner of the Clippers comes to an appropriately inglorious end.