Steve Nash ‘Would Definitely Listen’ to a Miami Heat Offer 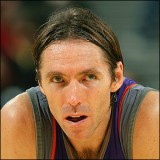 Steve Nash will be one of the most prized free agents this summer, and though the point guard (38 years old, and still leading the League in assists) says that returning to Phoenix is what he’d like to do if they’re serious about winning, he’s keeping all of his options open.

Those options, apparently, include possibly teaming up with LeBron James, Dwyane Wade, Chris Bosh and the rest of the Miami Heat. (*Gulp*)

Nash made an appearance on the Dan Patrick Show today, and said that if Miami made him an offer, he’d listen very carefully:

“I’d listen,” Steve Nash said. […] “I love what they’re doing there. A lot of people don’t like them because they put all that talent together.”

“But they’re professional, they play hard, they play together. Their coaching staff has done a great job. So, I have a tremendous amount of respect for them, and I would definitely listen.”

Steve Nash also said that he thinks the Phoenix Suns are willing to spend and make moves to improve the roster, so that he can have a legitimate shot at his first NBA championship. Nash — though still obviously brilliant at his advanced age — doesn’t have a lot of time left to be playing at such a high level.

If he bolts to South Beach or another contending team this summer, it’d be difficult for most reasonable basketball fans to be upset with Steve Nash’s decision.