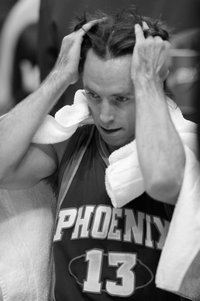 Remember when the Phoenix Suns were the greatest team in the world to watch, a conscious-less and free-wheeling bunch of crazies that launched innumerable three-pointers, and threw each other alley-oops seemingly every trip down down the floor? I do. They were such a revolutionary force, effectively turning the League on its head, that they even inspired a great book about their exploits.

Steve Nash, often credited with shaping the Suns in his own care-free image, says those days are over and that it’s time to buckle down.

For a team with visions of a title haunting their dreams, this is probably the right approach to take.

The high-flying ’04-’05 Suns were like that hot piece of eye candy you see in the club: Fun to be around and great to look at, but not someone you’d want to bring home for Christmas dinner. The Spurs, meanwhile, have always been that decent-looking girl that won’t wow anyone, but will always take care of business and keep things moving.

I guess Nash and his band mates are finally coming to terms with the fact that it’s time to take off the naughty skirt and pull on a business suit. And not a moment too soon.