Steve Nash Wants You to Work Out 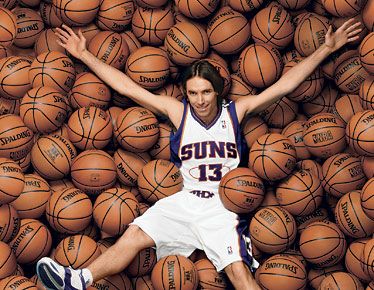 -Tim Donaghy is the ref under investigation by the FBI for betting on NBA games.

(Story time: When Derek had his infamous .04 moment, I was watching the game with an old roommate of mine. Dude was a bit, ahem, heavyset. After Fisher’s shot, we leaped off the couch and started screaming and hugging each other like maniacs – no Lil Wayne and Baby.

Unfortunately, when my roommate was running around the apartment, he scared the living sh*t out of the neighbors living a floor below us. One of them came running up to our place thinking something terrible had happened. When we explained to him what was going on, he threatened to call the police if he ever heard a noise like that from us again.)

-As Ryan pointed out in the comments of the initial ref scandal post, Bob Delaney was one guy who we could’ve ruled out from the start. Still, a pretty cool story.

You see, for nearly three years in the 1970s, Bob Delaney was Bobby Covert, an undercover cop for the New Jersey State Police on a special mission: infiltrate the mob.

His 21/2-year investigation of large organized crime families in New Jersey and Philadelphia, at a time when the mob was at the height of its power in America, could have been straight out of the Sopranos. Amid rumors that he had gone bad, he literally disappeared from the force to work with the state police and FBI. He became the fake president of a fake trucking company with a fake rap sheet. And gradually, he earned the trust of some of the most ruthless criminals in the Northeast.

(The Feed found something pretty interesting in light of today’s events: Spread stats on the various refs in the League.)

-Ime Udoka is probably not going back to Portland.

-Chris Mihm has re-signed the Lakers. That sound you hear? Oh, it’s nothing, just me banging my head against a wall repeatedly. Don’t mind me.

-Steve Nash opened the first of what is to become a chain of fitness centers. (Thanks to Skeets for the tip.)

-And finally for today: Let’s go maim whoever put together the Emmy nominations and didn’t include The Wire. Who’s with me?

Alright, have a safe weekend everyone. Don’t do anything that I wouldn’t do.