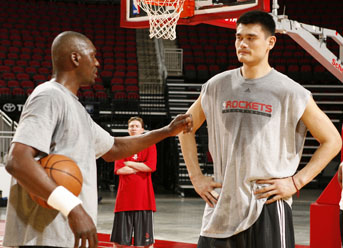 My granddad said to me on Monday during my day-late Father’s Day phone-call, “Jonny, looks like it’d be mighty hard to keep up a BAS-ketball magazine all year.”

(I should point-out that despite all his worldly intelligence and backwoods know-how, my granddad’s not so versed in the ways of urban basketball magazines)…

So I had to explain to him:

“Yea, there’s enough stuff to cover in the off-season. You know…like…”

I struggled for a few seconds before realizing two things: 1) that by next week, my granddad probably wouldn’t remember whatever stuff I told him we were covering, and 2) I wasn’t sure what that stuff actually was, anyway.

I mean, the NBA Finals was a laugher, the Draft is a glorified crap-shoot, and Team Kobe will surface to shoot again, regardless of management, coach, score, # of defenders, etc.

As far as the summer goes, that’s really about it. (Before you call ‘foul’ for my hacking-off the League’s three mega-events of the summer into one moderately witty sentence, know that I am one of the 120 people that watched this year’s Finals and I study 4 to 5 mock drafts a day. Capiche?)

Still, my granddad’s question posed an interesting and different perspective, as if writing 11 thousand words on Al Horford’s post-up set isn’t normal to some people. So I pondered: What could I write about that was recent and relevant, but wasn’t just more excess fuel for the Draft/Kobe hype-fire?

The answer came in the form of the biggest form in the game, 7’6 Houston C Yao Ming.

NBA.com reported on Tuesday that big Yao is working out with legendary Rockets big man Hakeem Olajuwon in order to improve his game.

We’re five years into the Yao Ming Experience in the NBA, and five years in I’m prepared to call the big “Ow” a bust. Straight up.

And don’t cry “overstatement” (or worse) just yet. Consider Yao’s statement after his first “Dream” workout on Tuesday as prime substantiating evidence: “I’m not saying I figured out everything today, but I hear from (Hakeem) I’m the biggest player on the court and I need to dominate.”

What astuteness. His basketball IQ must be through the roof. After three seasons of being soft and underachieving, two seasons of injuries and flashes, one game getting swatted by 5’6 Nate Robinson, and one series of being completely torched by 6’9 (and offensively-limited) Carlos Boozer, Yao is learning through extensive off-season workouts that he is “the biggest player on the court and need(s) to dominate.”

Pardon the dripping sarcasm, but, “Gee, Yao, wish we had told you that before…it’s no wonder you got bodied by Paul Millsap. Now let’s go to work!”

See what I’m saying? “Body by Wilt Chamberlain, mentality by Neville Chamberlain” (Let that marinate for a second…)

But “Jon,” you say, “What about his ’06-’07 stat-line? 25 and 9.4 is far from a bust!” Agreed. But look a little further into the same stat line and big Ow doesn’t appear so distinguished; in fact, he looks downright mediocre. Bust-ish, even.

Yao, a 7’6 center, #1 Draft Selection and 5-year vet, the TALLEST PLAYER IN THE LEAGUE, was a whopping 18th in rebounds, behind such NBA stalwarts as Al Jefferson and David Lee, and just percentage points ahead of the great Andris Biedrins.

He exploited his unparalleled height advantage to the tune of 1.95 blocks nightly, good for 11th in the league. This makes his shot-blocking proficiency less than Josh Smith’s and Andre Kirilenko’s, and slightly greater than the revered Sam Dalembert’s.

Turnovers? The man Yao took the cake. With his 3.48 per game, Yao registered a career-high and led all NBA big-men.

And that Game 7 where Boozer dropped 34 and made Yao look like a slow Gheorghe Muresan? The big Ow was also out-rebounded by Boozer…Memhet Okur… and Matt Harpring. Yao had 33 turnovers and 6 blocks for the series—you’d think dude was a point guard.

Whew. It’s exhaustive rolling out the heavy truth of statistics. I’m spent, and I didn’t even get to the 5 year statistical parallels with Rik Smits. That would have really solidified it. And fortunately for Yao, the League doesn’t keep the statistic of “blocks vs. times absolutely posterized”…even Shawn Bradley would be envious.

But is poor Yao really a bust? Or did I just make a major stretch for a fresh and resonant topic?

In this year’s NBA Draft, another freakishly gargantuan man will be selected #1 overall, Mr. Greg Oden. And like Yao in 2002, Oden enters with rampant labels of being “the next great big man” who will “change the game forever.”

Yao has proved to be neither. The labels are, how should I say…busted. I’m not prepared to declare Yao and Kwame Brown interchangeable, but do you think the Rockets would take the Big Ow #1 again if they could do it over? With Amare Stoudemire and…gulp…Carlos Boozer in the same draft? I didn’t think so.

Now the Trailblazers will select Oden #1, with the expectations that he will indeed be the next great big man, complete with the MVP and Championship hardware.

Oden could start by realizing that he is the tallest player on the court and needs to dominate. Apparently, it took Yao five years and a workout with The Dream to process that one. I think Oden gripped that fact in one Championship half against Florida.

But if, five years from now, Oden isn’t in the Top 10 in rebounds OR blocks, leads all big-men in turnovers, has ZERO playoff series wins, and is seeking self-admittedly needed help from a retired NBA star in order to improve his game, then I’ll write a rambling blog deeming Oden a bust as well.

My prediction, however? I think once he faces Oden three or four times, Yao will resurrect up George Mikan for a session…

Until then, I’m going to sit back and indulge in a delicious summer of Draft-hype, Kobe rumors, and Stephen Jackson news alerts.
A fresh perspective from my Granddad couldn’t hurt either.

Can I get a bust call, please?