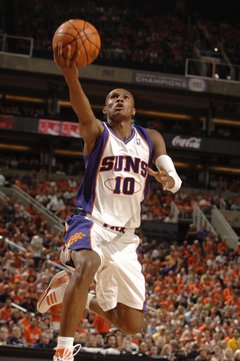 Let’s be honest: The Phoenix Suns are a better basketball team than the Los Angeles Lakers. They have more talent; they have better shooters; and they can win against the Lakers (and most other teams) even when they have a bad shooting night. The Lakers, however, cannot win against the Suns (and most other teams) when they have a tough shooting night. They have to be perfect on both ends of the floor. Therein lies the difference between the two squads.

On Sunday afternoon, the Suns were very human and they came away with a critical victory. The Lakers played perfect basketball for 36 minutes and still lost. Such is life.

-Kobe got tired in the fourth quarter. I don’t care what he says.

-Barbosa is the fastest human being playing basketball today.

-I could beat, nay, destroy Kwame Brown in a game of one-on-one.

-Mark Jackson is a pretty funny dude; he’s quickly becoming one of my favorite color guys.

-I can’t quite decide what made my weekend more enjoyable: An attractive and (ahem) well endowed woman falling out of her shirt at a club on Saturday night, or Ronny Turiaf’s hair*.

-At money time, the Lakers went away from what had worked so well in the first three quarters: Rebounding, ball movement, pounding the rock inside, and Kobe’s magic.

-With Nash on the bench and Bryant running out of gas, the Suns made their run and it was a wrap.

Will this be a sweep? No. Not with Phil Jackson’s game plan. Not with a rested Kobe Bryant. For the Lakers to win a game or two in this series, however, Lamar Odom needs to come to the realization that he cannot be stopped. Ask for the ball Lamar; be the ball!

The Suns will probably take game 2, and here’s why: They won’t miss as many shots as they did in game 1; they don’t want to go into a raucous Staples with the series tied like last year; and most importantly, Kwame Brown will still be on the Lakers’ playoff roster.