Surprise: No Surgery for Kobe 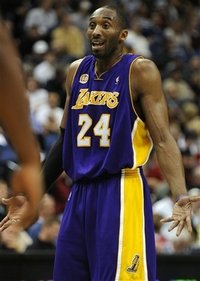 Earlier this week, Kobe hilariously declared that we’d all simply have to wait for him to post the date of his impending right pinkie finger surgery on his website. It was a strange thing to do, but this is Kobe Bryant we’re dealing with here, so it wasn’t entirely surprising.

What is surprising, however, is Kobe’s ultimate decision. It turns out that the Mamba actually had a valid reason to have the hoops world on the edge of its proverbial seat; he’s elected to forgo the surgery.

“I have always felt that I can still focus and play at a high level even through various injuries. That’s really just part of the game. When the doctors told me recovery from a procedure could be 12 weeks, I just decided now was not the time to have surgery.

What it really came down to for me is that I just didn’t want to miss any time ‘punching the clock’ for the Lakers, given all we are trying to accomplish as a team this NBA season.”

Say what you will about the man, and many of you certainly have, but don’t you dare claim that he’s not committed to winning.

Of course, whether or not his idea of commitment will end up hurting his team in the long run (say, should he aggravate the injury sometime between now and next June) remains to be seen.