T-Mac Gingerly Making His Way Back 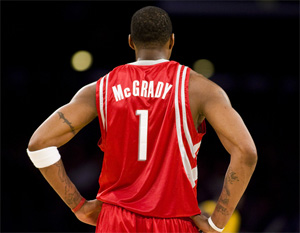 To understand just how deep of a hole Tracy McGrady had fallen into, consider the fact that when he shows up for practice these days, it makes the news.

T-Mac is putting his basketball life together again, and one encouraging sign this past weekend — for Mac, the Rockets, and their fans —  was the Rockets’ star practicing with his teammates for the first time since knee surgery last year.

McGrady is doing his best to manage expectations, and not get peoples’ hopes up too much (a wise decision), but according to those who saw him on the court, things look promising.

Perhaps the setting was fitting, a reminder of how far Tracy McGrady must go. But for the first time since microfracture surgery last spring, McGrady, 30, practiced with the Rockets on Sunday. He went through a few stints of the scrimmage, moving well and without pain in a small, but significant step in his comeback.

His first participation in training camp did not alter his schedule. General manager Daryl Morey said it was “part of the process.” The Rockets expect McGrady to be out at least until an MRI scheduled for Nov. 23. Still, he played and all reports were that he played well.

Clearly, he’s nowhere near ready for true NBA action — something he only managed to 35 times last season — but for the Rockets, what matters is that T-Mac appears to be moving in the right direction.

Not much is expected of the Houston Rockets in 2009-’10. If they can somehow get one of their two superstars on the court, and healthy again, the season could then be viewed as something of a success.