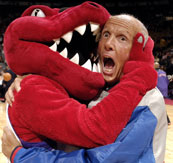 This has been in the works for a few months, and I can’t believe it’s really happening. Charles Barkley and Dick Bavetta are going to have their foot race on Saturday. Here’s the press release:

Let’s get ready to stuuuumble!” On the evening of Saturday, February 17, former NBA superstar and current TNT basketball analyst Charles Barkley, 43, will challenge veteran NBA referee Dick Bavetta, 67, to a footrace during TNT’s coverage of NBA All-Star Saturday Night presented by EA SPORTS. The distance of the race will be 235 feet (78.3 yards), as Barkley and Bavetta will race baseline to baseline, and then to the half-court line of the regulation basketball court at the Thomas & Mack Arena. In conjunction with the race $50,000, $25,000 from the NBA and $25,000 from TNT, will be donated to the Boys and Girls Clubs of Las Vegas.

The initial challenge to race was issued on January 4 when Barkley subbed in for TNT game announcer Steve Kerr and made a rare courtside appearance with Albert for TNT’s broadcast of the L.A. Lakers @ Sacramento Kings game. During the first half of the match-up, in which Bavetta was officiating, Barkley made the off-the-cuff comment, “I can outrun Dick Bavetta right now, Marv.”

“Charles, let me say something to you, there’s no way you can critique the game the way you critique it if you cannot beat a referee,” weighed in Minnesota Timberwolves All-Star forward Kevin Garnett.

“It better be a short race, because if it’s an endurance race, I think Bavetta has got him licked,” said reigning two-time NBA MVP and Phoenix Suns guard Steve Nash on Barkley v. Bavetta. “I’m sure Charles will try to make the distance just right for himself.”

I hope Bavetta wins but they cheat him out of it as a way to give Sir Charles the star treatment bestowed upon him by the Dick Bavetta’s of the world. Will there be a Vegas line on this game? I would guess… YES!

Oh, and in other news, Gilbert promised to put 50 on the Blazers the next time they play and he thinks LeBron doesn’t want the big shot. I’m getting a little tired of clinging to every word out of his mouth, so do what you will with this. Gil and LeBron are about to play on the same team. If Wade can stop from talking trash to Dirk, he’d probably be the guy that gets the last shot… if the East are within 40 points at the end.