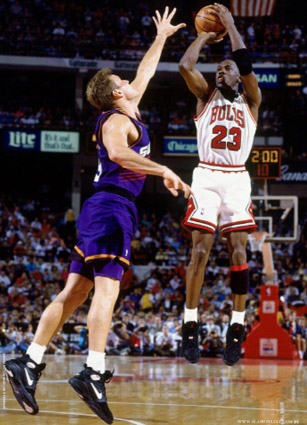 Point blank, Michael Jordan is the greatest player ever.  In our newly released SLAM Presents Jordan 2010, Russ Bengtson breaks down why that is. (If you’re feeling this essay, be sure to pick up a copy of the special issue now). — Ed.

There will never be another Michael Jordan. Sometimes it’s best to get the obvious out of the way right out front, and this feels like one of those times. So, there. “The Best there Ever Was, The Best there Ever Will Be”? Yep. It’s right there on his statue in front of the United Center, literally carved in literal stone, and thus inarguable. So that’s that. Right?

Maybe. Michael Jordan wasn’t the best at everything, and he didn’t do everything first. Bill Russell finished with double fistfuls of rings, Wilt Chamberlain averaged 50 points a game, Dr. J dunked from the free-throw line. In a sense, Jordan was the ultimate aggregator-he took the best of everyone who came before and rolled it up into a ready-for-prime-time package. He threw down ridiculous dunks, scored bucketloads of points and won championships. Even played defense and practiced. And fortunately for him (and for us), his rise coincided with the NBA’s. They lifted each other to heights never before reached. Jordan was the right player at the right time, and the world conspired to make him a god.

Not to say it was all manufactured. Far from it. Jordan’s unedited NBA career spooled out like the most implausible of movies, from dropping 63 points on the 1986 Celtics (in their house, no less) to that last, hanging jumper over Bryon Russell. Even the Wizards epilogue, jarring in its entirety, provided moments to savor. Scoring 50 as a gimpy 40-year-old? Who does that? Not to mention two more All-Star Games and the priceless gift of allowing countless more fans to say they saw him play live. In the meantime-even while the real Jordan was still in his prime-a fruitless search for the next Jordan went on.

Paradoxically, there has been no next Jordan, there can be no next Jordan, for the simple reason that there was a first Jordan. “If I could be like Mike”? No chance. His career was structured in such a way that it can never be duplicated, only imitated. It wasn’t perfect-after all, his teams did get taken to two Game 7s (which they, um, won)-but it was so close that it may as well have been. The comparisons will always be there, and everyone who strives will always fall short. Fall too short, and you’re Harold Miner. Come too close, and you’re Kobe Bryant. The greatest tragedy of Kobe’s career-if you can find tragedy in a five-times-and-counting NBA Champion and certain first-ballot Hall of Famer-is that it cannot be viewed except through the Jordan filter. (It doesn’t help that his championships were all won playing for Michael’s old coach.) Five rings? Sure, but he’s only been Finals MVP twice. And he was only regular-season MVP once. Better than Jordan? Yeah, right.

Here’s the thing: Jordan built his career on the foundation laid down by those who came before him; Dr. J and David Thompson among them. This is how it always worked. Others who came after were expected to do the same. But Jordan didn’t leave much room for future players to build a legacy of their own. While those he emulated had fallen short or left things unfinished, Jordan didn’t. How do you build on a mansion? The game itself changed, and Jordan was the one who changed it. It’s hard to believe that any one player will ever usher in that sort of change again. Jordan defeated all the archetypes, expanded the game, created an archetype of his own (the basketball Terminator-a relentless cyborg covered in a thin human shell). It’s not even a question of whether anyone can equal his greatness-rather, is his greatness even one that can be equalled?

It might not be possible to follow in his footsteps at all. The fragmentation of the media has taken away the chance of having that mythology built up. The fragmentation of the NBA (and the apparent willingness of even the biggest stars to leave their teams) has taken away the chance to battle and battle before overcoming a particular challenge. And the battles aren’t the same anyway-teams like the Bad Boy Pistons and the Riley Knicks are as much of an anachronism as set shots and underhanded free-throws. Beat a team now, and another rises to take its place. There are no clear-cut heroes, no unmistakable villains, just an ever-changing pool of challengers. It’s hard to be king of the mountain when the mountain itself is gone.

It goes both ways, of course. In a way, Jordan was fortunate to have played when he did. We don’t know what the effect of a 24-hour news cycle would have been on MJ’s career, how he would have been seen filtered through the eyes of hungry bloggers, pop-culture-addled columnists and Rachel Nichols. When Sam Smith wrote The Jordan Rules, it was a radical act-the unmasking of a superhero. Now? Re-reading it 20 years later, what are the shocks? That he was vulgar? That he was competitive? His Hall of Fame speech was more damning. But for the first six years of his career, the public perception of Michael Jordan was shaped by fawning beatwriters, Sports Illustrated profiles, the NBA on NBC, and Nike’s ad agencies. By the time The Jordan Rules went to press, his perceived personality was more or less set in stone.

Compare that to someone like LeBron James, who’s been a highly scrutinized public property since he was in high school. Unlike Jordan, he wasn’t allowed to grow within that protective umbrella, to just play basketball while the rest was taken care of. Now? Controlled access has become a thing of the past, what with the emergence of Flipcams and camera phones and Twitter accounts. No longer do we need to wait on the Curry Kirkpatrick stories and the Walter Iooss photos and the Wieden + Kennedy campaigns to get the filtered truthiness. Like HBO Sports says, nothing is out of bounds.

So what happens? Let’s say LeBron averages a triple-double for a season (although it seems highly unlikely), or 40 points a game, or wins eight NBA titles (forgetting for the moment that just equaling Jordan would require him to win at least one Finals game, then-appropriately enough-23 more). Would he be viewed as Jordan’s better then? Maybe not. Leaving Cleveland and teaming with Dwyane Wade in Miami took him off the One True Path-and all it takes is a single misstep to fall. Not to mention being just like Mike, only better, simply doesn’t cut it. You have to change the game.

But who knows? Maybe things will be viewed differently in the future. Maybe the LeBron/Wade/Chris Bosh Heat team does change the game in some fundamental way. Maybe 100 years from now, when the topic of the greatest is debated by people who never saw Michael or Kobe or LeBron play live, there will be a sense of objectivity that doesn’t-that can’t-exist in our time. After all, historians love to revise. Maybe when emotion is stripped away and careers are judged simply by the numbers, someone else will be viewed as the best there ever was, the best that ever will be.