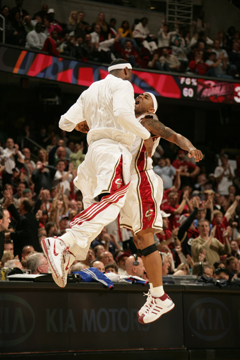 I don’t think I was alone in being dead wrong in how I predicted the 2007-08 season to proceed. Who foresaw the Blazer and Rockets streaks? Did anyone have any clue the Hornets and Lakers were going to battle it out for the West’s top seed? Miami winning just 15 games? Who even had an inkling that the situations in Dallas, Phoenix, Miami and New jersey would warrant Shaq and J-Kidd trades? Philly and Atlanta–you saw that coming? That’s the beauty of NBA Novembers–the rush of the unexpected future. I vowed, after last season, to never do the Record and Playoff Prediction Thing again. I mean, do I really have even the faintest idea if the Knicks will finish second, third, fourth or fifth in the Atlantic division, let alone if they’ll win 33 or 40 games? Nope. And I’m calling BS for any of my colleagues that do. But after two weeks of balling, there are more than a few squads that interest me–teams I will be watching closely throughout the season, for a variety of reasons. Check ‘em out…

Toronto: I was a guest on a radio show hours before the season tipped-off. One of the hosts asked me if I was looking forward to the Philly-Toronto match. I said something to the effect of, Of course not, Toronto’s soft and Philly’s overrated. Then, after the Rapts handled the Sixers, the host emailed me, warning me to rethink my stance on Toronto. I hedged, put my tail between my legs and said that maybe I spoke too soon, that maybe Toronto is street-tough now and the Eastern Conference is on notice. They’ve gone 3-4 since then, with losses to Boston, Detroit, Atlanta and Philly, four of the best squads in the Conference. I can’t figure this squad out. I’m definitely not cool with dismissing them as I have in the past. They have two big men playing exceptionally well. O’Neal is beyond solid in his new role and Bosh is a newly aggressive beast–I even saw him barking on his teammates after a blown defensive assignment. Calderon is often sublime. They have athleticism on the wing and Bargnani is an enviable option off the bench. Still, I remain skeptical, they just lack something abstract. I think they scare a lot of teams, but no one fears them. There’s a difference.

Cleveland: LeBron is going to have a historic statistical season, but his MVP candidacy will be tied to his team’s performance. Coming into the season, I suspected the Cavs would struggle early on and not hit their stride until after a huge ’09 shake-up–say, a big trade or coaching change. Instead, they’ve

jumped out the block like Michael Johnson. The Mo Williams pick-up is key, because unlike Larry Hughes, he’s finally offering Bron a partner in attack. You ever been in a pick-up game where it seems that you’re the only one balling on your squad? Balling is different than hustling. The Cavs have always hustled (scrapping, rotating, going after loose balls, etc.), but Bron has always been the only Cav balling. Mo actually balls. He’s not tentative, he’s a little cocky, he goes in without any reticence. He’s paying noticeable dividends for Cleveland, right now. What doesn’t bode well for the Cavs are those two creaky geezers they start down low. Will Big Z and Big Ben hit the wall sometime in March or April? The early-season Eastern Conference contenders (Atlanta, Boston, Detroit, Philly, Toronto) feature lithe, athletic bigs. Z, Ben and Anderson Varejao ain’t cutting’ it. And what’s up with Delonte and his Ronald McDonald bush?

L.A. Lakers: This team is so deep that they need not worry about the great unknown–injuries. Even if Kobe goes down for 10-15 games, L.A. could escape relatively unscathed. Every one of the players in L.A.‘s nine-man rotation would, at least, vie for a starting spot on most teams–even playoff squads. They have talent to spare. What’s important to consider is that L.A. has solved the problems that plagued them against Boston. They play exceptional team defense now, rotating and switching like the Piston and Spurs squads of a few years ago. Bynum is every bit of the interior presence that we suspected he’d be. Homeboy leads the League in blocks and does not allow opponents to indiscriminately grab offensive boards at their whims. And Ariza? Just as LeBron finally has another baller in Mo Williams, Kobe finally has another athletic wing to help pressure the ball, crash the boards and get out on the break. Notice that Ariza is almost always on the floor at the end of games…well, that is when L.A. isn’t up by 20-plus points. Analyze the Lakers and tell me: where are the holes, what are the deficiencies?

Washington: I lived in D.C. for five years. I saw the Jordan-Rip Era morph into the Gil-Jamison-Tough Juice Era. I loved the Wiz, able to root for a hometown NBA squad for the first time in my life, after the Braves left Buffalo months before I was born. Since leaving D.C. in 2005, I’ve continued to follow the Wiz closely. It’s been a frustrating franchise and team to root for. Gil is an enigma and almost always injured, these days; Eddie Jordan seems completely incapable of instituting a culture of accountability or any semblance of a commitment to playing serviceable defense; general manager Ernie Grunfeld has toggled between calculated prescience (letting Larry Hughes go in the summer of 2004 and signing Caron Butler for about $20M less) and an aversion to risk-taking that belies boredom (he‘s failed to improve the roster for two straight summers). This might be my final season as a Wiz fan. When Gil gets back, it’s show-n-prove time for this squad. They have a real possibility of being a dangerous dark horse or just a joke.

New Orleans: The Hornets are gaining traction as the consensus No. 2, the squad everyone ranks right behind the Lakers in the West. I don’t necessarily buy that. Chris Webber has been vocal in his skepticism of this squad and I see exactly where he’s coming from. I’ve never seen a contender so cripplingly dependent on one player, like the Hornets are with Chris Paul. Don’t let David West fool you. He reminds me of Elton Brand, in that they’re both a little undersized and lack the explosion of some of their peers in the class of elite bigs. Brand, however, has a more varied post-game and post-games are reliable first-options. I’d proffer that close to 50 percent of West’s offense is the product of pick-n-pops with Paul. Without Paul, West is less of an All-Star and more of an Udonis Haslem. Last season, the Hornets had Bonzi Wells and Janero Pargo coming off the bench to create offense and keep the game moving. James Posey brings a lot to the table, but creating offense isn’t one of them and when you watch the Hornets, they get bogged down in these stretches of extreme scoring ineptitude. They’re only averaging 96 ppg. This is an issue, especially when you factor in the good possibility that the best defensive minds in the NBA are in film rooms, studying ways to neutralize Chris Paul. Even a moderate neutralization of Paul would result in a catastrophic breakdown of the Hornets offense because of its almost comic reliance on the young virtuoso.

Charlotte: Is this going to be a squad that comes together, wins a surprising 45-48 games and snatches a playoff spot from one of last season’s top eight? Or are the Bobcats going to play yawn-ball and further sully the careers of Larry Brown and Michael Jordan? This team is full of first round picks, but not the type that transform franchises. They’re either solid lottery picks (Emeka Okafor, Raymond Felton), potential busts (Adam Morrison), overrated dudes (Gerald Wallace, Jason Richardson) or kats lost in the shuffle (D.J. Augustin). It all comes down to whether geriatric Larry Brown is truly up to this task and whether Michael Jordan is actually interested in running a professional franchise. We’ll see how it shakes out.

San Antonio: Have you seen this roster? George Hill? Roger Mason? Michael Finley? You can’t win with three stars–one older, two gimpy–and a squad full of should-be-retirees and marginal almost-D League dudes. The Big Three has never been surrounded with this level of mediocrity. I’m anxious to see how the Spurs perform once Parker and Ginobli return. Will Duncan–already on his seeming last legs–have enough left to shoulder an increased load, due to the suckiness of his teammates? The cliché is that we always underestimate the Spurs, then they end up winning 53-58 games and make us all look stupid. But I just don’t see how this squad wins more than 45

games in the West. I think it’s going to be like watching Rome’s demise.

Oklahoma City: Speaking of rosters: have you seen this one? It’s extremely young and practically devoid of the type of developed talent necessary to win games in the NBA. As much as I love Durant and Jeff Green and Russell Westbrook, that’s not a Big Three. As bad as they are, I watch this squad because I’m keeping tabs on Young Kev, concerned that playing for this dismal franchise is going to strand Durant’s career. I see 70-plus losses for the Thunder, which happens to be the worst team moniker in the history of professional sports.

Denver: The Nuggets play like a respectable team now that Billups is running the show. The rec league days left with A.I. Although they lack frontcourt depth (Denver would have been extra-dope with McDyess), this is a well-balanced, talented team that should be taken seriously. It’ll be interesting to see how much Melo benefits from playing with a real point guard and whether Billups will reprimand J.R. Smith after he jacks up his trademark 30-foot jumpers. With their roles more clearly defined and, what seems to be, a different, more practical philosophy, Denver seems more poised than the young Blazers to move ahead of the down-turning Suns, Spurs and Mavs in the West’s pecking order.

Atlanta: The Boston-Atlanta game was the best of the season, thus far. If I were a Celtics fan, I’d be deathly afraid of the Hawks. If that game showed us anything, it showed us that the Hawks have only a healthy respect for Boston and nothing else. Atlanta is one of the few Eastern teams that suffers no inferiority-complex when it comes to the Cs and this is an unexpected testament to the soft-spoken, reserved Mike Woodson. Without Josh Smith, the Hawks went toe-to-toe with the champs. By the end of the season, we may be mentioning Joe Johnson with Pierce, Kobe, DWade and Bron; Marvin Williams is tapping into his potential; Horford is playing like he belongs right below Dwight Howard and Andrew Bynum on the young big totem pole–the squad seems serious. They are better and deeper than they were last season. But here’s the big question: Are they still erratic? After eight games, I’m not confident that they aren’t.

Vincent Thomas is a columnist and feature writer for SLAM. He can be reached at [email protected]