The Curious Overconfidence of Mike D’Antoni 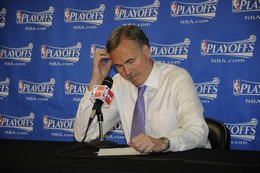 You could forgive the Phoenix Suns if they came into this weekend’s monumental games against the Spurs feeling a tad anxious; they are effectively playing for their postseason lives.

San Antonio has proven itself to be a tougher, more resourceful, and smarter Playoff team. You’d think that all of the confidence would be over on the Spurs’ side, and you’d be wrong.

Suns head coach Mike D’Antoni is sure of himself and his players, and he plans on mopping the floor with the Spurs tonight.

That’s our mindset. We still don’t have any doubt we can win this series.”

Now, I’m not sure what D’Antoni saw on the grizzly game film from the series’ first two contests that made him think his team was going to “bust” Duncan and company, but you gotta respect the man for not showing any fear.

There’s a lot riding on the outcome of tonight’s game; it remains to be seen whether D’Antoni and his guys can back up the tough talk with their play.