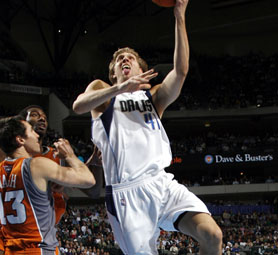 How do you preview a game like tonight’s Phoenix at Dallas dream match-up? I’ll keep it simple. This is the biggest thing EVER! I’ve been writing my recaps on the D.A.Y. and this game is more important than those hundreds of games combined. It is possible that Phoenix could steal home court advantage from the Mavs – they are only three and half games out – but if Dallas is supposed to be a juggernaut for the ages, then they should not be threatened by anyone.

If the Mavs were to lose this game, it would be two straight losses after a 17 game winning streak, with the Suns creeping up for that homecourt. Remember, Phoenix won two game sevens on their home floor last season. The Mavs could get tight and go into a relative death spiral. If Phoenix loses, the Mavs would regain their footing and put doubt in the Suns’ collective mindset, leading the season series 3-0 and probably earning home court, where they are 30-3 this season, heading into tonight’s game in Dallas.

You could argue that tonight’s game is the real NBA Championship. You could, and I will. Whoever wins tonight is going to have home court advantage throughout the playoffs, and winning the whole thing. The Eastern Conference does not concern me. Yes, I’m overlooking the Heat, Pistons, Cavs, and the rest of that mess much like everyone overlooked the St. Louis Cardinals, Chicago Bears (for good reason), and last year’s Heat. I’m fine with that.

The last time I can remember a regular season game of this magnitude in the NBA was during the Lakers first Shaq-Kobe championship season, where they met Portland at the Rose Garden with each team riding 11 game winning streaks. The Lakers won, went on to win 19 in a row, and had home court advantage for the game 7 where the Blazers choked away a trip to the Finals. Who knows how the series, or NBA history would have turned out if the Blazers won that one regular season game? The Kobe to Shaq alley-oop in the fourth quarter of that game with the L.A. crowd going crazy is probably the iconic NBA moment of the 21st century. Would that have happened if Portland had homecourt advantage?

Of course, there are what you could call sleepers in the West that could ruin the current season’s glorious 7 game series for the ages. San Antonio is on a 13 game winning streak, have all the playoff and championship series experience in the world, and would love to spoil the fun for all of us. Jerks.

Houston has the Yao-Mac tandem, although neither one of those superstars have been out of the first round yet. I don’t see any other logical sleepers that can ruin the Dallas-Phoenix playoff series. Even if Golden State and Nellie have the Mavs number, there is a big difference between regular season and playoffs. Utah is built for the regular season, and it took Jerry Sloan forever to get to the Finals with two of the best players of All-Time in his starting five, never missing a game for 10 years or whatever it was. Denver is still a mess, even if they’re playing better against bad teams. The Lakers have too many injuries and I don’t respect the Clippers, Kings, Hornets, or any of the other first round dead meat out there.

This is the game of the century, until April 1st when they play again. It’s very rare that two teams this hot and virtually unbeatable play each other. This has been a long time coming. Here’s what I wrote back on January 22nd.

Has anything changed since then? The Mavs have been unrealistically dominant, obliterating (yes, OBLITERATING!!!) everything in their path. Consistent, dominant, well-rounded, well-coached, defense and offense, you name it. Phoenix got better and started blowing everyone out with Amare working his way back into his dominant form, but then Nash got hurt and they sputtered for a minute. Now Nash is back, and Phoenix has become more of a balanced team, improving on defense, still running up the score on offense.

Looking at the season series so far, they met up way back in the early stages of the season when they were both struggling to get going, as crazy as that sounds. Look, I even wrote something about it.

Dallas has won both head to head games so far, the second one being one of the better games of the season. Dirk hit the big shot. Here, more old stuff for you to read.

That game was intense maaaaan. It should be just like that tonight. The Mavs are angry after losing to Golden State. The Suns are happy go lucky Sun-like. Feel free to make predictions if it suits you, or to post comments live as it happens, or just sit back and watch and enjoy the show. My plan is to sit back and be entertained.