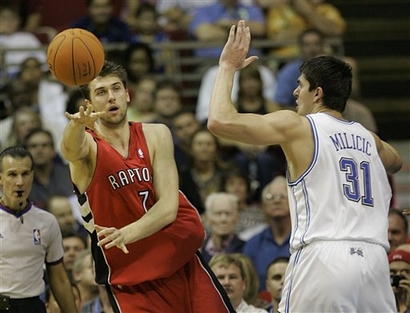 A lot of games last night. There was SLAM contingent at the Knicks game, while I was out partying with the office softball team at our end of the year party. It’s too bad that Jim Jones song the Giants used to shoot Js to is played out, cause there’s a word that starts with B that could describe last night perfectly. I spent most of the party giving advice to a 40 year-old woman who works for Combat Handguns magazine or something like that, on how to handle her 15 year-old kid. Discipline. Discipline. Discipline. And shoot him in the knee cap if he doesn’t listen. Moving on to the much softer world of the NBA.

TORONTO 91 ORLANDO 84
Four for four in the fourth from three. That’s 44 fours. 5 for 8 from three for the game. Andrea Bargnani, sharpshooting #1 overall pick. Chris Bosh missed another game due to injury, so Andrea carried the scoring load with 23 points. The other team had a #1 overall pick (Dwight Howard), a #2 (Darko), and a #3 (Grant Hill). Andrea was the star of stars on this night. Dwight had 17 and 13, and Carlos Arroyo scored 22 getting starting for the injured Jameer Nelson. Bargnani and Darko have been the two signature Euromysteries at the top of the NBA draft in recent years. It looks like Andrea will become the better player. Darko had 8 and 7.

WASHINGTON 120 DENVER 91
Carmelo outscored Gilbert 37-34, but Gil had help. 26 from Butler, 19 from Jamison, 12 and 13 from starting center Brendan Haywood, just to name a few. J.R. Smith has been celebrated for his big nights, giving the Nuggets a bonafide second scorer. In this game he scored 2 points from the FT line and didn’t hit a shot. Andre Miller was 3 of 14.

NEW JERSEY 108 MILWAUKEE 95
The Nets are starting to slowly turn their season around, now that they are playing bad teams. I’m not impressed yet. A few weeks ago (or was it last week? Life’s a big blur) I wrote about Jason Kidd’s minimalist triple doubles. In this game he had 10-10-10. Just enough for a triple double. Watch out Oscar, he’s coming for you. Jason Kidd is more resilient than Jason from Friday the 13th. Vince is on one of his hot streaks, going for 36 and 9. Villanueva led the Bucks with 23, but Michael Redd was held to just 9 points. The Bucks are the slept on disappointing team of the year. 15 and 12 for Bogut on 6 of 7 shooting if you’re looking for that silver lining.

NEW YORK 94 ATLANTA 82
Maybe one of the people that went to this game will write about it. Jared Jeffries started and gave the Knicks much needed energy. The Hawks still don’t have Joe Johnson out there and this game was over in the third quarter at the very latest. It was a much bigger blowout than the score indicates. I was told that the Mets David Wright and the Giants Brandon Jacobs were both at the game. Those are my very favorite players in all of baseball and football.

UTAH 105 LA CLIPPERS 86
If Deron Williams and Carlos Boozer played together for any other team, you could still compare them to the way Stockton and Malone played. Deron: 28 and 14 assists. Carlos: 28 and 15 boards. The Clips had a nice year when you could take them seriously as a contender, but I don’t know if that’s still the case. Kaman played 40 minutes, putting up 19 and 10. At least that’s a good sign for the Clips.

PHOENIX 99 MIAMI 89
Dwyane Wade missed this game cause of wisdom tooth pain. It was on espn when I was at my softball party. The Suns toyed with Miami. 12 wins in a row for Phoenix. Alonzo Mourning was Miami’s leading scorer. These two teams combined for 23 points int he third. How does that happen? The Suns nearly blew a 25 point lead, making them one of about 8 teams in this league that are afraid to put away an easy win. Nash hit a big three, finished with 18 and 11, the Sun never sets.

INDIANA 101 DETROIT 90
The Pacers got some injured and suspended (WHOOOOOOOOOO!) players back, and handled the Pistons behind Jermaine O’Neal’s 26 and 14. They put this match-up int he national spotlight on Christmas day last year, if I’m not mistaken. Man, this rivalry is slipping.

BOSTON 101 PHILLY 81
The Sixers lost their ninth in a row. The Celtics have won three road games in a row against Atlantic divison teams, and are now a game out of first place. I have to go and find new words to describe just how depressingly bad the Atlantic Division is. If you combined these two teams together right now, it still wouldn’t be a good team. I got nothing to tell ya about this game. Paul Pierce scored 18, the Sixers might want to take care of that lingering issue that’s still out there, this is just depressing man. Attendance was allegedly 13,211. Yeah, sure.

CLEVELAND 104 CHARLOTTE 101
Adam Morrison came into this game in a 3 for 34 shooting slump. He broke out of it with 11 points in the second, and Brevin Knight had 14. The Cavs allowed the Cats to stay in the game, and closed them out at the end. The real story of the game was the Cleveland organization celebrating Anderson Varejo “Wild Thing” wig night. Wild Thing from Cleveland? Rick Vaughn is spinning in his fictional grave. I think LeBron might be conserving his energy for the second half of the season and the playoffs.

SAN ANTONIO 95 MINNESOTA 82
The Wolves score 26 points in the second half with 17 turnovers. The Spurs play defense. Duncan had 24, Tony Parker had 23, Garnett and Blount had matching 19s. After the game, the Spurs were more upset with their lack of effort in the first half than the way they turned it up in the second. Perfectionists.

CHICAGO 99 SEATTLE 84
BIG BEN! 15 points and 20 boards. Yeah! The Sonics somehow outrebounded the Bulls, but they’re still soft. Ben Gordon was the high scorer with 27. Seattle wised up and had Earl Watson join Ray Allen on the DNP list, going hard after those lottery balls. Alfonso Soriano and Devin Hester were in the crowd. I guess this way take your baseball and football stars to basketball games night.

PORTLAND 85 MEMPHIS 79
The Grizzlies overcame a 21 point deficit, only to end up losing because Ime Udoka hit a 20 footer with about a minute left. Hakim Warrick blew two dunks. Z-Bo led Portland with 21 and 11. Why does the NBA have to have 12 games one night and three the next?