The D.A.Y. Chicago stepped up for Dallas 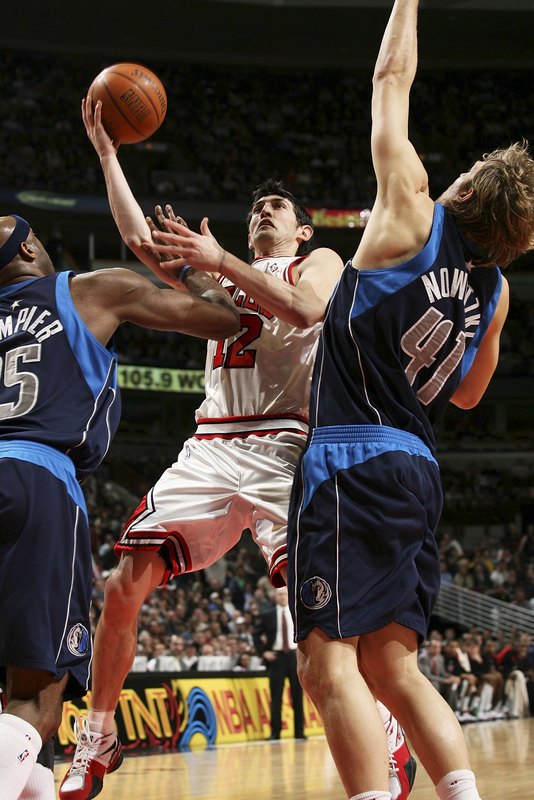 Yesterday I was racing against the clock because I thought I had to start posting a new ad campaign, and that led to me not editing my first half recap down nearly enough. 12,000 words. What was I thinking? I just found it amusing to see how things have been changing as the season drags on. Going back through what I’ve written about the games of the season, I was reminded that Chicago might be a disappointment so far, but the Bulls have stepped up in some of their bigger games, such as the opening night smackdown of the champs in Miami. Which leads perfectly into…

CHICAGO 96 DALLAS 85
If it bleeds we can kill it. With the TNT spotlight on them, the Chicago Bulls figured out a way to slow down both Dirk and Josh Howard long enough to build a lead that the Mavs couldn’t come back from. Jerry Stackhouse gave some support, but it was the defense of PJ Brown on Dirk and Josh’s off-night that ended the Mavs 8-game winning streak. Dallas shot jut 31% from the field. Remember how last year the Mavs were considered by some to be the Indianapolis Colts of the NBA? The Spurs were their Patriots that they could never get by until Dirk broke through with that 3 point play. Could this be an omen for the city of Chicago that the Bears are going to shock the world over the Colts? Am I reaching here? Refocus. Ben Gordon got hot and led Chicago with 30. Ben Wallace grabbed 17 boards and blocked 4 shots. Luol Deng added 21 while Nocioni and Chris Duhon seem to be in Scott Skiles rotating doghouse.

LA CLIPPERS 102 NEW JERSEY 101
The sick thing is that the Nets are still only one game out of first place. They need to leave California and never go back. Three straight games, the straight heartbreaking gut-wrenching losses. Against the Kings, they blew a 20 point lead and lost it when Mike Bibby got a small measure of karmic payback for the Robert Horry shot. The fans went crazy. Against the Warriors, Monta Ellis did it to them. Play wit it. (swaggerjacking?) The fans went crazy. In this game, the Nets looked so lifeless that Charles Barkley invented a word at halftime, which was Burn Barner I believe, the opposite of a barn burner. Kenny Smith then described Corey Maggette as a square hole that can’t fit into a round peg or something like that. Kenny will never be an astronaut and he does not have the right stuff. The point is that the score at halftime was 57-40 and Charles was saying that he understood the Nets lack of energy because of what the Monta shot did to them psychologically. In the second half, Vince Carter decided it was time to start caring and he attacked the hoop and started nailing shot after shot. The Nets took the lead with under a minute left. And then… Clippers down by two, Sam Cassell with the ball, Vince leaves Cuttino Mobley wide open for three. Big mistake. Clippers by one, 0.6 seconds on the clock. Jason Kidd throws a great lob to Vince for the win, but it was still a tough play and Vince couldn’t get it to go down until after the buzzer when he looked like he was ready to act like he hurt his ankle on the play. Another crunch time meltdown for Jersey. More California fans went crazy. The Clippers had balanced scoring with Cassell dishing out 10 assists. Vince led the Nets with 33.