The D.A.Y. of Mike Bibby shooting and Ron Artest not retiring 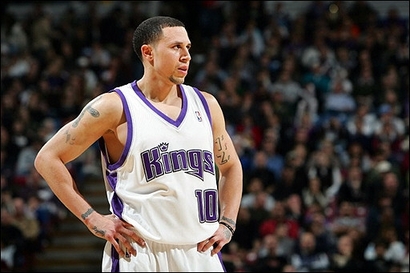 Let’s get this out of the way quickly since it’s all-Kobe all the time these days. He was hot at the start scoring 17 in the first 9 minutes, but the Warriors made some adjustments to get the ball out of his hands. The Lakers blew a big lead, but ran off a 14-0 run in the fourth keyed by you know who, and they held on for the win. The Warriors had some chances, getting threes that were too little too late, and it just wasn’t meant to be. Kobe finished with “only” 43 and 9 rebounds. Lamar Odom had a monster game with 24 and 19 as L.A. out rebounded Golden State by 30 in a 115-113 win. Monta Ellis scored 31 in the loss. The Los Angeles Clippers are suddenly on an inexplicable hot streak, winning four in a row. Golden State is now a game and a half out of the playoffs. We NEED the Warriors to grab that 8th seed so Nellie can scare the Mavs in the first round. Don’t do this to us Clippers.

Okay, got that out of the way. On Friday I wrote a whole post about how I was excited to sit back and play some God of War II, but the weather was just too nice to keep me indoors this past weekend. I did manage to sneak in a few levels. I haven’t played that much but I’m giving it my full endorsement. In most video games these days, the first levels are tutorials where you learn the controls, take care of some easy enemies, and work your way up to a boss. In God of War II, it’s here’s the control, hit X hit O, kill this guy AND NOW A COLLOSSUS IS TRYING TO KILL YOU!!!!

The action is intense from the second you turn on your PS2, and I actually could feel my eyeballs bleeding from intensity at times. I don’t know how they did it, but they have improved upon perfection. It is going to thunderstorm this week, and I might be able to get deeper into the game at night.

I guess I should get back to talking about basketball. Ben Collins is all over the NCAA tourney and what it took to get us to the last group of teams. Or, the “Road to the Final Four” if you’re more of a traditionalist. The lowlight of the tourney for me was Friday night, hanging out at a bar with this kid I know who went to Georgetown. Cocky. In our office pool which is hosted by CBS Sportsline, when we entered our picks, the site revealed what percentage of worldwide participants were selecting which team for each game. As an experiment, I chose the more popular team in every single game – not the favorite, but the gambling fan’s favorite. That bracket is the best I have ever done in an office pool. I have 3 of 4 Final 4 teams in with a real chance to win the big prize. If Kansas had beaten UCLA, the greatest David vs. Goliath showdown of modern times would have nearly materialized. Nothing to do with Dorsey vs. Oden. It could have been me vs. SLAM’s publisher Dennis Page. I would have had the support of every single person in the office at every magazine that’s made there. Alas, it wasn’t meant to be. Maybe the Kansas win wouldn’t have guaranteed it, but I’m going to pretend it would have. The Jayhawks are dead to me forever. How about another turnover guys?

In our slamonline bracket, spartdog is on fire. All four of his teams are there, and he has Florida over Ohio State in the Final, just like college football. Okay, back to the NBA.

SACRAMENTO 107 PHOENIX 100
As Kobe has entered the MVP discussion, Steve Nash seems to be trying to dare those of us who picked him in spite of his lack of defense to defend him – pun intended. The bane of his playoff existence from the Sacramento-Dallas series, Mike Bibby, lit him up for 37, hitting on 9 of 12 threes. Ron Artest, when not flipping through leaflets about his 401k, played enough basketball to register a 24 and 9. Barbosa scored 27 and Amare added a 23 and 11.

MINNESOTA 94 PORTLAND 93
Kevin Garnett stole the show from the Foye-Roy showdown, hitting a buzzer beater to win the game. 17 for Foye, 22 for Roy. If Bargnani’s exploding appendix has hurt him in the rookie of the year race, this game might have been a showdown of the top two candidates left standing. But KG threw up a prayer and it was answered. 22 and 9 for Garnett as Minny stays alive as a dark horse playoff team. By that I mean, they maintained their half game lead over the Kings for the 11th seed.
Running through the expected blowouts… Detroit 121 Milwaukee 95, San Antonio 120 Seattle 97, and in a close game Dallas got by Atlanta 104-97 with 27 points or more from each of their big three.

DENVER 105 CLEVELAND 93
Hey, remember when LeBron vs. Melo was supposed to be the next Magic vs. Bird that would carry the league into the 24th century? Well, Allen Iverson is part of that set-up now and he floor generaled his way to 18 and 12 while Carmelo scored 27 on just 19 shots. Denver ran and ran, and the Cavs sort of made an effort to, but not really. LeBron was held to 18 and 8 assists with only three boards, and in the understatement of the year, he does not have an Allen Iverson to share the load with. The Cavs were somehow still in the game late, but Denver finished them off with a burst of points.

CHICAGO 92 INDIANA 90
Can you get excited about a tight Bulls win over Indy with Ben Gordon hitting another game winner, and a showdown between Gordon and Jermaine O’Neal? That is as good as it gets between these two teams, and it’s not doing it for me at this point in the season. Other than O’Neal’s 39 and L’il Dun’s 23, the Pacers did not have a double digit scorer. Ben Wallace had a Big Ben-esque 2 points and 14 boards. Ben Gordon loves head to head showdowns and hitting game winners. He is the NBA dream.

NEW ORLEANS 106 HOUSTON 94
T-Mac scored 31 and the Rockets had a 12 point lead, but they gave that up as the Hornets closed out the win in the fourth. 28 for Chris Paul, 23 for David West. New Orleans is right below the Warriors in the hunt for the 8th seed. Again, we do not need any team other than the Warriors playing Dallas in the first round. It would be nice to have Chris Paul on the playoff stage, but not at the expense of Nellie vs. Cuban/Dirk/Avery. I am cheering for you to lose games, New Orleans Hornets. The Lakers and Denver seem to be on solid playoff footing, so there’s really only one spot available.

What a happy ending.