The D.A.Y. of Rockets and Wizards supporting casts 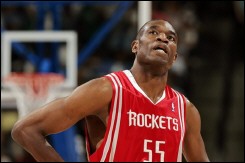 There’s this thing called Gamefly, the Netflix for video games. Huge mistake signing up for the free trial. Marvel Ultimate Alliance, I want my life back. And speaking of freakishly enchanced and deformed hero/villains, it’s good to see ESPN and SI putting their favorite athlete on the front of their sites. Barry Bonds. Long time, no see. Does anybody care? You know, an NFL superstar who was suspended for 25% of the season is about to play a Playoff game in a few days and people just know it’s part of the game. The self-righteous way that baseball is covered is RIDICULOUS.

WASHINGTON 113 CHICAGO 103
Gilbert was held in check by the Bulls with a lowly 20 points, so the Wizards went with a balanced attack, led by Caron Butler with 26, 10, and 7. Kirk Hinrich had a huge game for a guy that hasn’t hit a shot all year, with 33 and 9. I’m not embelishing that much about Kirk. He’d connected on 6 field goals in 2007 heading into the game, but broke out of his funk with 11 of 21.

HOUSTON 102 LA LAKERS 77
The curse of Mutoni strikes. Not only because he warned us that the Lakers aren’t that good, but because he subliminally put pressure on me to write my next Dirty 30. You people don’t understand just how amazing the next Dirty 30 is going to be. Marc Stein and Marty Burns and Johnny Sportsline or whoever else writes NBA power rankings are all quaking in their boots. They tried to infiltrate the castle and steal my secret plans like a rival did to Giuliani. So I had to change it up. Don’t worry though, it’s going to be an extravaganza. As for this game, the Lakers got blown out for the second game in a row, and the Rockets did it with just 8 points from T-Mac, who was 0 for 7 from three. Dikemebe Mutombo had 19 boards and 5 blocks, including sending Quiznos Bynum’s garbage into the crowd with a finger wave, and passing Bynum’s mentor Kareem on the all-time leaders board in the blocks category. After the game, Deke lobbied for quote of the century “It’s amazing, just the way I’m playing. Even to myself, I’m sitting down like, ‘Whoa, is Mutombo really playing like that?’ I haven’t seen myself jumping for a rebound like that for a while.” He’s an amazing man.

INDIANA 97 BOSTON 84
The Pacers won behind 23 and 15 from Jermaine O’Neal, and they have their first three game winning streak of the season. The unfortuante story of the game is the injury to Tony Allen. So it’s not just the superstars that are getting hurt this year. It’s young rising potential stars too. This really sucks for Boston, though it helps their chances in the race for Oden.

NEW YORK 106 PHILLY 99
Speaking of pathetic Atlantic Division teams, here’s two of them. Nate Robinson returned to action, didn’t score in 12 minutes and as far as I can tell he didn’t do anything too Nate-like. I saw this game was on TV and went back to playing Ultimate Alliance. Steph dominated the first quarter when I was watching, and let’s just move on. Chris Webber is a very wealthy man.

CHARLOTTE 103 DETROIT 96
The Pistons were missing Chauncey with an injury, so Rip Hamilton decided this would be a good time to get tossed for complaining in the fourth quarter. Flip Saunders brought Rasheed of the bench for “basketball reasons.” Or so he said. The Pistons scored 8 points in the second quarter and totally took the Cats for granted. Flip Saunders is going to blow the season for this team. Good, cause I’m sick of them. His performance as the coach of a team that was handed to him as a smooth running machine has been Switzer-esque. Later today I am scheduled to talk to three of the better players on the Bobcats. The question I will ask each one of them is “Why is Matt Carroll unstoppable?” 17 points and 7 boards.

ORLANDO 91 GOLDEN STATE 76
Dwight Howard, 30 points, 25 boards, 21 years on this earth. There is nothing I can possibly say to make those numbers more impressive.

LA CLIPPERS 92 MINNESOTA 91
Kevin Garnett had a monster game of 19, 17, and 4 blocks but came up short at the buzzer on an open jumper. Yesterday when we were having a civilized debate about who will end up with the better career, KG or Dirk, I calmly mentioned to Khalid that Dirk is more reliable as a scorer at the end of the game. Khalid, being Khalid, started yelling and screaming and stomping around like a bratty problem child. I can’t wait to throw this back in his face in a few hours. He will counter by blaming KG’s teammates for not giving him enough help. Ricky Davis had 24 and 7 and Mark Blount had 21. But still, I agree that KG never has the help he needs, and the Dirk-KG question will not be resolved for many years. Though that doesn’t get KG off the hook for not being a crunch time shotmaker. Oh, Corey Maggette came back from injury with 21 and 8 and the game winning shot.

DALLAS 99 PORTLAND 74
Ok, and here I go providing evidence against my own argument. The Mavs are so good, they don’t even need Dirk every night. He took 6 shots and they won this game easily. LaMarcus Aldridge is starting to figure out the NBA game with 14 points, 6 boards, and 2 blocks.

SAN ANTONIO 92 DENVER 83
JR Smith came back from his suspension and was credited with “spreading the floor” for Iverson. A.I. had 33 in the loss, shooting well, but he only got to the line 3 times. Tim Duncan missed 7 free throws and the Spurs shot 43% from the line and they still won easily enough. I guess playing defense helps. Tony Parker had 26 and 7.

MIAMI 107 SEATTLE 103
Dwyane Wade spent the first half setting up teammates and the second half dominating with 25 points. For the game he finished with 29 and 13 assists. The Heat are a much better team with their best player in the lineup. And when they play teams like Seattle and Portland. The Sonics got 29 from Ray, and Nick Collison had a more pedestrian 21 and 9 after his 20-20 night. Chris Wilcox had 28 and 13, but Seattle has now lost 6 in a row. Keep on tanking!

TORONTO 90 MILWAUKEE 77
Bosh and the Raptors responded to losing their first place spot with a big performance. Charlie V didn’t play against the team that traded him, but TJ Ford had 15 and 10. Obvious advantage on this night: Raptors. Bosh had 30 and 8 while Bogut grabbed 17 boards, 9 of them on the offensive glass.

NEW ORLEANS 96 ATLANTA 77
Jannero Pargo led all scorers with 24. That’s really all you need to know. Joe Johnson and Marvin Williams took the most and second most shots for the Hawks, combining to go 8 for 37. Reported attendance: 10,120. I admire what the Hawks are doing. There are so many bad teams in the NBA, but the Hawks want us to know that they can still be the worst if they want to.