The D.A.Y. of the game of the year 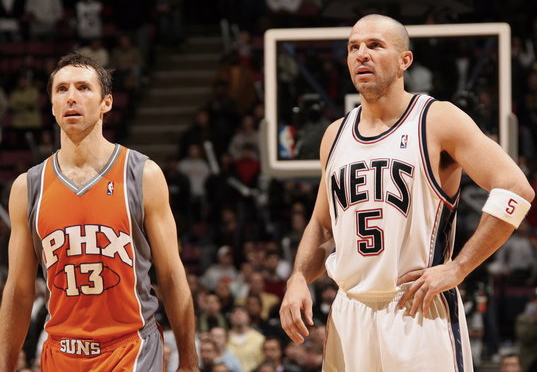 I wrote up my whole post. It was all good to go. Then my browser shut down unexpectedly and it’s lost forever. I am pissed. For that reason, I’m not even mentioning the two non-insane 161-157 games. Dwyane Wade had 32-11-9, missed a game winner in the fourth, won in OT. The Kings are struggling on their homecourt too now. Mavs and Pistons was a possible Finals preview. Detroit won in Dallas, with Sheed hitting a bunch of threes. So what. It’s all about one game.

PHOENIX 161 NEW JERSEY 157 3OT
If you weren’t watching this game, I feel sorry for you. You have my deepest sympathies. What a game! Lang and Ben were there, and Lang’s got his game notes. This was a classic for the ages. It was a great game for four quarters, but once Vince fouled out and Nash hit that three to tie with a second left, it morphed into an unforgettable night. Amare fouled out, Raja fouled out. There were other significant parties like Boris Diaw hitting the winning basket by backing down on Jason Kidd who received no double team help, Shawn Marion scoring easily, RJ hitting a big three, and an actual lift from the Nets bench. Forget all that. This was an old school showdown between the two best team leading point guards since Magic. Jason Kidd showed so much heart out there, making impossible plays, highlighted by a three point play against all odds. Steve Nash kept responding with a big shot or perfect pass. They kept going back and forth, refusing to allow their team to give in. It ended when Kidd dribbled the ball off his foot, an ironic ending to one of the greatest PG duels of all-time. The Final numbers for the two of them were phantasmagorical. I actually went to a Thesaurus to find the right word to describe them. Kidd had 38, 14, and 14. Nash had 42 and 13, and cold blooded response after response. WHAT A GAME!