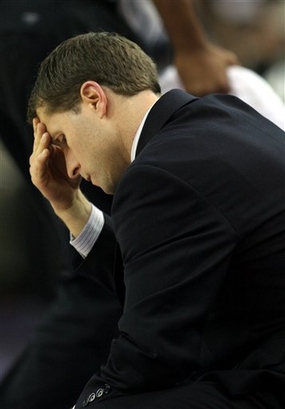 X-mas vacation starts in a few hours. This is a very good thing. Looking ahead, who is excited for the Miami-Lakers annual showdown on Christmas Day? Anyone? Anyone? Two years ago it was deservedly hyped up as the biggest spectacle of a game in regular season history. Shaq and Kobe gave us some drama for the holidays as Al Michaels waxed poetic about how important the big stage is for superstars. Dwyane Wade stole the show. Last year, I remember thinking how ridiculous it was for the NBA to try and make this an annual thing like the Cowboys on Thanksgiving. I have no memory of the game that was played. How’s that for tradition? This year, no Shaq and no Odom. No brick wall quotes, and no ferrari quotes. Kobe might have the better supporting cast than Wade, yet Miami has a better shot of winning the championship, even if they are on the fringe of the 8th seed right now.

Only two games last night. Iverson sat down with his old coach John Thompson for TNT. Talked about how it’s Melo’s team and he would just help out, then a few moments later started calling it “our” team. Then he started talking about what him and George Karl have in store and how he needs to teach Carmelo about the playoffs. He also described his time with Webber as a succesful partnership between two scorers. We’ll see how this pans out.

WASHINGTON 126 SACRAMENTO 119
The Wizards have been a horrible road team this season. The Kings are always great at Arco. Naturally the Wiz put up 44 points in the 3rd quarter when Antawn Jamison simply could not miss. Kevin Martin scored a career high 40, and the Kings actually led at halftime. The real story of this game is that Ron Artest claimed to have a knee injury and chose to sit out. He was quoted as saying “It’s not an all-season thing. I guess it’s just being older. I’ve got to take care of my body a little better.” Hmmm… could this be the beginning of Ron’s latest episode of random self-inflicted destruction? Maybe with Gilbert Arenas in the building, Ron wanted to make sure that he is still considered the craziest. The Wizards are starting to heat up. The Kings are very disappointing, and I’ve already mentioned that several times. The clock on Ron is ticking. Keep it together Ron Ron. Keep it together.

DETROIT 87 CLEVELAND 71
A big game. At least, as big as any can be in the Leastern Conference. The Pistons sent a message, getting a vintage Mr. Big Shot performance from Chauncey in the house of LeBron. The Cavs have now lost back to back to the Nets and Pistons, two of the short list of teams that will challenge them for a trip to the Finals. LeBron had 26 and 10 in the loss, Chauncey had 17 and 10 after struggling for most of the first 3 quarters. If this is going to be the Eastern Conference Finals, then all I can say is let’s go Washington and Chicago and Jersey and Orlando!!!

Today is a very special day. Happy Festivus everyone! I am a participant in this year’s Airing of Grievances. It should be up this afternoon.