The D.A.Y. Sasha Vujacic was better than the best 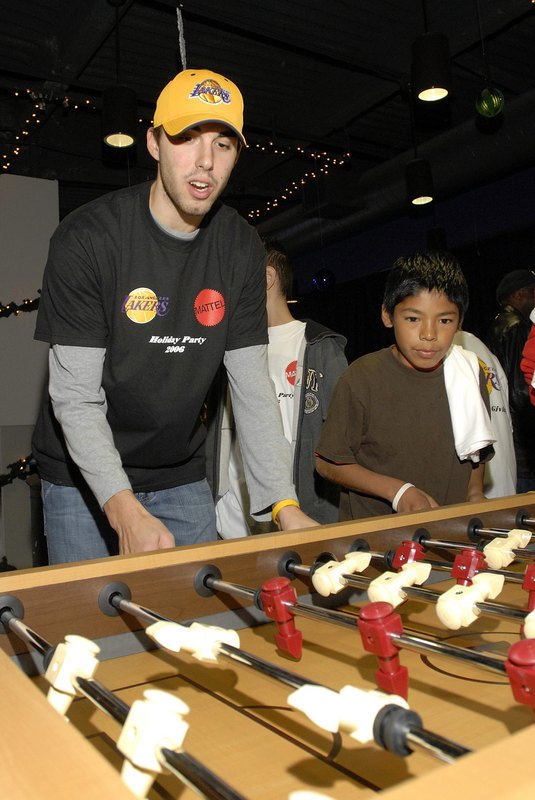 Hey, how about those NFL playoffs? When does baseball start again? Let’s go METS!!!

O.K., obviously I’m not emotionally or mentally together today. After hundereds of tortilla chips, 4 pounds of assorted salsas, pizza, garlic knots, and beers, yesterday ended with a thud. Congrats to Khalid Salaam. Your team proved that they never needed Donovan McNabb, giving credence to Rush Limbaugh’s hillbilly heroin fuled racist tirade. Next week its Jeff Garcia, Rush Limbaugh and the Eagles down in New Orleans against the Katrina victims. I know who I’ll be cheering for, because I don’t hate the poor and disenfranchised, and I believe in democracy and equality, unlike those that cheer for the Eagles to win football games.

Tony Romo’s magic hands saved the weekend. So it wasn’t a complete waste of time. It’s raining and gloomy today, just days after I went jogging in a t-shirt in 70 degree weather. The NY teams folding in the playoffs is responsible for this weather. It’s perfect for the mood of the city.

LA LAKERS 101 DALLAS 98
13 game win streak for the Mavs? Sasha was not impressed, scoring a career high 16 with game winning three, one of his 4 threes. Kobe saved most of his scoring for the fourth and the Lakers picked up a huge and inspirational team win. Dirk had 29 in the loss.

TORONTO 116 WASHINGTON 111
Not much D, lots of layups, and 21 free throw attempts from Gilbert, who scored 33, which should bring his average wearing the duracell battery uniform way down. Chris Bosh led the Raptors with 24 and 15.

MINNESOTA 103 HOUSTON 99 OT
T-Mac had to throw up 29 shots to get 31 points. The Rockets had their 5 game winning streak snapped. The return of Tracy from injury right as Yao went out has really messed up Yao’s MVP year. KG and the Wolves continue to get it done in OT, winning their third straight overtime game. KG had 26 and 13, and Mark Blount continued his run of scoring enough to lighten KG’s workload with 21 and 10. Mike James and his 10 assists were key.

PHOENIX 128 GOLDEN STATE 105
D’Antoni went deep into his bench and found James Jones, who scored 25 points hitting 5 of 8 threes. Another weapon for the Suns. Yikes. Shawn Marion had a quiet 24 and 17 game, thought Andris Biedrins countered him with 17 boards of his own. Ike Diogu had one elbow to Irish Pat Burke’s head. 26 for Barbosa on 4 of 6 threes. Balance. Blowout.

MIAMI 93 PORTLAND 90
Good thing Dwyane Wade didn’t eat a cheesburger while he was sitting out with his injury, cause he might have been suspended by the team for fatness. He didn’t though, and with Wade back, the Heat were able to just barely get by the Blazers. Z-Bo had an off night, but hit a key shot down the stretch, as did LaMarcus Aldridge. Here are more thorough game notes from the first win of the latest Ron Rothstein era. Brandon Roy led Portland with 18.

SAN ANTONIO 110 MEMPHIS 96
Haven’t written this in a while, so here goes. GINOBILI!!! 34 points on 10 of 15 shooting, 6 of 8 threes. Tony Parker missed his first game of the season so Manu stepped up and took over. After the game, Tim Duncan was controversial as always “We won the game. I think that says something. We need to trade (Parker) or get rid of him or something.” Sarcasm. Pau Gasol led the Grizzlies with 24.

ORLANDO 87 BOSTON 79
The Celtics came out flat and uninspired. Tony Allen led them with 21, 9 and 7 steals. Magic enforcer Darko Milicic tried to take him out with an elbow in the fourth, but failed. Grant Hill led the Magic with 21 points, on just 4 of 6 shooting. 13 of 14 free throws will do that for you. Doc Rivers on the Celtics effort “I told our guys that I’ve never been more disappointed in a team in one half than our first half tonight.” Nice.