The D.A.Y. Utah and Jersey got Ws and Stephen Jackson got lucky 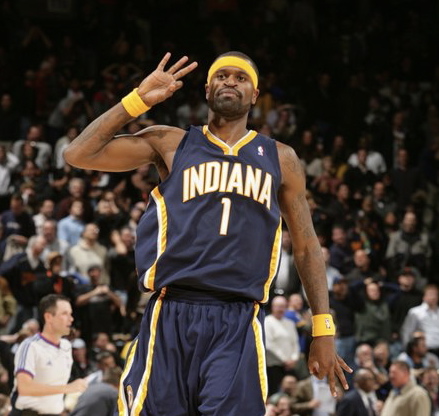 If I ever suffer a public meltdown, I hope it’s not as bad as Michael Strahan’s. The Knicks and Nets each had maybe their best wins of the year. And the back cover of the Daily News is Strahan with the headline “Dope Opera” and the Post has “Big Blue Bully.” Great.

UTAH 83 SAN ANTONIO 75
The Jazz played great defense, moved the ball around, dominated the glass, and put the game away with a late spurt. No more losing streak. Boozer had 23 and 16 to Duncan’s 21 and 10. Deron Williams hit all four of his threes and dished out 9 assists, Matt Harpring played well and this was one of those statement games in a Sloan-Popovich showdown.

NEW JERSEY 106 BOSTON 103
The Nets, still reeling on that 6 game losing streak, fell apart in the third quarter and watched as Paul Pierce led the Celtics on a 13-0 run. Vince was getting frustrated, but Jason Kidd kept them in the game, and the Nets fought their way back into it. Vince heated up, and the Nets finally got a bigtime contribution from the bench with Hassan Adams going for 16 and 8, hitting a monster three when it looked like the game was out of reach. RJ came through with a big three of his own, Pierce hit some more big shots, but he rushed an off balance three for no reason. The final possession for the Celtics was an absolute disaster. They needed a three to tie, and everyone batted the ball around, from Bassy to Perk to Wally. And then Wally for some reason started to drive to the basket and lost the ball out of bounds. Pierce had 31 and Wally had 25 for Boston. Jason Kidd just missed another triple double, finishing up with 19, 9, and 8.

NEW YORK 101 CLEVELAND 98
A shocking end to the game. Tied with about 45 seconds left, the Knicks put the ball in Jamal Crawford’s hand so he could go one on five and hit a trademark terrible Crawford shot. Before the play, they showed Q Rich and Jamal screaming at Eddy Curry, trying to fire him up for some reason. I didn’t understand why. The reason was that Jamal started to drive, and Eddy cut to the basket, received the pass in motion, dunked it and was fouled. Hit the free throw. Where did that come from? Steve Francis tried to give the game away at the free throw line and with an airball, but the Knicks hung on when Donyell Marshall missed a three at the buzzer. Curry scored 12 of his 24 in the fourth, and Q Rich continued showing that for some reason he can stand up to LeBron one-on-one. 27, 9, and 2 for Quentin. 27, 7, and 6 for LeBron. One of the few alleged good teams in the East just lost on their home floor to the Knicks. Highlight of the game was when Nate Robinson was called for travelling on a fast break when he tried to bounce the ball off the floor and backboard for the dunk. That was hilarious. Even Isiah nearly started cracking up laughing. I remember watching young Zeke throw a pass like that once, but it was during an All-Star game and it was to either Jordan or Dominique. Nate’s quote after the game: “I won’t be trying it again unless we’re up by 20. But that’s spontaneous Nate Robinson. I can’t control that.”

PHOENIX 102 HOUSTON 91
The Suns jumped out to a 22 point lead in the first half, and then watched Houston take it back from them with McGrady giving them the lead with about 9 minutes lead. I thought Houston was supposed to be the team that collapses with a big lead? Nash hit a three to give the Suns the lead, and though the Rockets got close again, the Suns finished them off with a 14-3 run. That’s five wins in a row for Phoenix. Yao had just 18 and 6 in 28 minutes. You’d think he could just overpower Phoenix inside all night, but that didn’t happen. Amare had a 22 and 15 game, and Nash had 17 and 8, hitting the threes.

INDIANA 108 GOLDEN STATE 106
Stephen Jackson is a lucky man. He gets hit by cars and walks away from it, and he hit one of the luckiest game winning shots you’ll ever see. Pacers down by 1, he was just standing at the three point line, and the ball was batted out to him by what looked like Baron Davis. Jackson shot and didn’t miss. L’il Dun was handed the responsibility of inbounding the ball with one second left for the Warriors. t was ugly. Baron had a near triple double in his return to action with 24-9-9 and so did Jamaal Tinsley 23-8-8. Al Harrington hit 6 threes on his way to 28 points for Indy.

ATLANTA 99 CHARLOTTE 90
I guess I saw the good side of the Bobcats the other night. This was ugly. They started out 0 for 13 from the field and didn’t hit a shot until there was a little more than 4 minutes left in the first. Adam Morrison was guarding Joe Johnson, which is a bad idea by Bickerstaff. The Hawks built a huge lead, and nearly coughed it up if not for a few key buckets by this year’s surprise crunch time star Tyronn Lue. Sean May topped his career night from the previous game with 21, 17, and 5. He thinks he’s Tyler Hansbrough or something. Joe Johnson scored 36 for Atlanta. Okafor was struggling and Bickerstaff sat him for most of the game. He had no rebounds or blocks in 17 minutes. Strange.

DALLAS 117 TORONTO 98
Dirk left after just 10 minutes with blurred vision. What the hell? The Mavs are just too deep for Toronto – even without Dirk. Josh Howard, Dampier, Stackhouse… 11 wins in a row. Bosh put up 18 and 11 in the loss.

ORLANDO 94 SEATTLE 84
Dwight Howard vs. the soft finesse of the Sonics? This was as scripted. Dwight went 8 for 8 from the field on his way to 24 and 12. The Magic are rolling. After the game Dwight said “We’re just having fun. When you’re having fun, you’re out there playing hard.” Hear that Scott Skiles? The Sonics are in a shooting slump, and when that happens they lose. 39% from the field and Ray Allen led the Sonics with 21.
LA CLIPPERS 105 MEMPHIS 90
The Clippers are 7-1 at home. This was a home game against Memphis. The Grizzlies were not beating Denver and the Clips back to back on the road. Cuttino Mobley hit his first 9 shots and had 24 for the game. Elton Brand contributed 20 and 9. Hakim Warrick led the Grizzlies with 22.