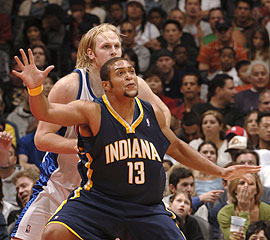 Welcome to our first installment of Player’s Ball, the new spot at SLAMonline for player diaries. This is the online diary of Indiana Pacers Center David Harrison.

This summer I spent most of my time out in Colorado training. My coach treated me like I was in college again, making me wake up early in the morning, do drills and all that stuff, so I’m in pretty good shape heading into the season. I haven’t done much else differently. I read a lot of weird books over the summer. I read Fear and Loathing in Las Vegas. I’m reading Alice in Wonderland now. That book is definitely not for kids.

As far as the Pacers go, I’m confident. We have a core on this team that most teams don’t have. We have a balance between the first, second, and even third unit where we can rest when we have to. We’re prepared for injuries. We’re prepared for a lot of things. I think we’ll definitely make the playoffs. It’s still too early to tell with us, just how good we’ll be though. We look good at times, we look terrible at times. Do we run and gun or slow it down? We’re in a little bit of limbo right now. We’re such an up and down team. We have to find our balance. Marquis Daniels was a good addition, and he’s getting healthy now. He’s a really good player and a good personality on our team.

I don’t know how much I’m going to play, whether my role is to rest Jermaine or to rest Al Harrington at that position, or whatever. I think I have the potential and the ability to play a lot, and I hope I get to show that this year. Every year my role changes. I really don’t want to get too many technicals this year. That’s my only personal goal. I don’t know how to hide my emotions very well. You can see them on my face. I don’t even say anything and the refs are on me. I think the refs are beginning to understand me more though. I don’t think they’re bad guys or anything and I don’t talk back to them.

As for the off court stuff, it’s like everybody thinks we’re this big dysfunctional family, but we’re not. This is what I think happened. We are a family here and Stephen Jackson was protecting a teammate. Our actions get put in the papers but stuff like that happens around Indy all the time.